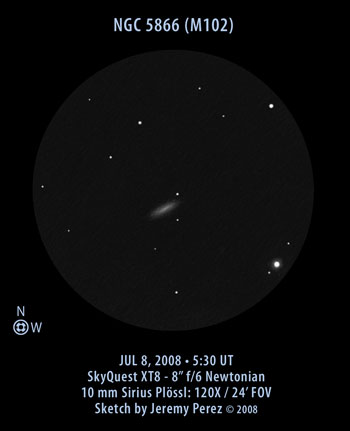 NGC 5866 appeared small, bright and strongly elongated. I estimated its length at about three arc minutes with a width less than one arc minute. My observation and sketch estimate a PA of 118 degrees. NGCIC.org lists 128 degrees. Although the galaxy possesses a thin dust lane, I could detect no hint of it. Brightness of the galaxy increases strongly toward the core; however, it doesn’t appear stellar. While scanning the area at low power, I ran into the soft glow of slender galaxies NGC 5908 and 5879.