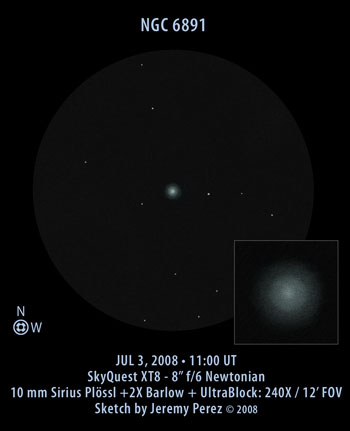 This was my fourth and final observation and sketch during my recent night at Anderson Mesa. I picked it from my Bright Star Atlas since it was a convenient find next to the tail of Delphinus. Sky Atlas 2000.0 provided the star hopping route. At low power (37.5X), it stood out as a brighter star that really liked averted vision. At 240X, it took on a double-shelled appearance with a brighter, but non-stellar peak at the core. It exhibited a pale, aqua-gray color. I didn’t end up using the UHC filter on it, since dawn was making its presence known, and I was feeling pretty wiped out.