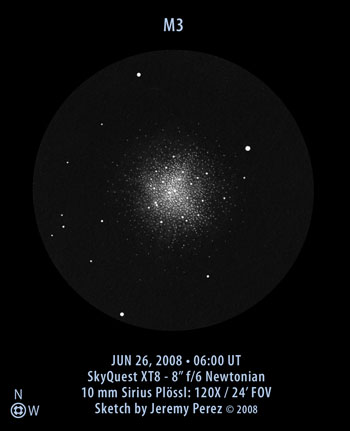 After touring a trio of Messier galaxies this evening, I settled in for a long look at the beautiful globular cluster, M3. At low power, it appeared as a soft spot on a gray background. At 120X with a bit of averted vision, however, it exploded with stars. The grainy, flickering haze swept right across the face of the globular and out to a distance of about 6 arc minutes from its core. Two subtle drifts of brightness swept to the northwest and southwest, leading to the impression that the cluster was gliding toward the east-southeast. Fainter star trails seemed to radiate straight from the center. I plotted 24 specifically brighter stars across the body of M3 in the sketch.

Brimming with some 500,000 stars, M3 is known to contain a large number of variable stars. Hanes/Madore, Globular Clusters, 1978, notes 212 variables in the cluster. At least 170 were determined to be RR Lyrae variables and these were used to pin the cluster’s distance at 33,900 light years. It is situated about 40,000 light years from the galactic core and is approaching us at 147.6 km/sec. Although M3 typically appears about ten arc minutes in diameter through amateur telescope, it actually has an apparent diameter of 18 arc minutes. This corresponds to a diameter of about 180 light years. The cluster was discoverd by Charles Messier on May 3, 1764.