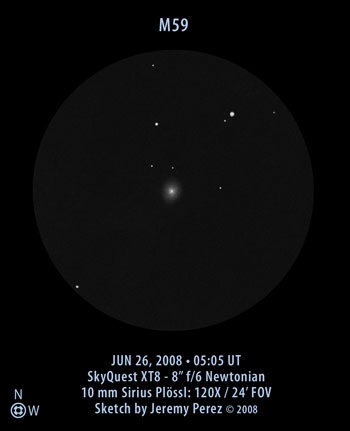 After a satisfying look at M60 and NGC 4647, I moved on to M59. This elliptical galaxy was elongated slightly at a PA of about 160 degrees (ngcic.org lists the PA as 165 degrees). It had a smoothly fading luminosity profile with a pronounced stellar core.

At 60 million light years away, M59 measures about 90,000 light years along its longer axis. It is host to 1500-2400 globular clusters. It was discovered on April 11, 1779 by Johann Gottfried Koehler, and independently discovered by Charles Messier on April 15. Both Koehler and Messier were following the comet of 1779 when they ran across M59 and M60. Messier also discovered M58 during this sweep.