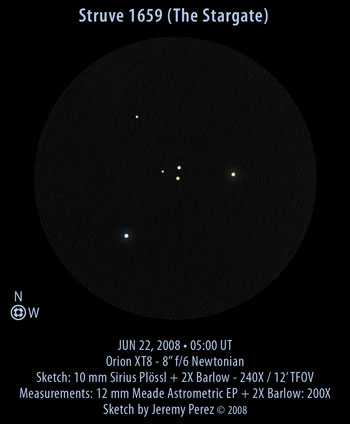 While making my way to M104 last week, I ran across this startling multiple star. I had read about “The Stargate”, but wasn’t counting on seeing it that night. The nearly symmetrical arrangement of the nested triangles is hard to miss, and difficult to peel my eyes away from once I saw it. One thing that I also noticed was the beautiful colors the stars appeared to display. The two bright central stars seemed to trade yellow and blue back and forth between each other. I finally settled on yellow for the southern and blue for the northern. The fainter star in the inner triangle appeared dull orange.

After preparing a sketch, I went to work with the astrometric eyepiece. The problem was I wasn’t sure which star was the primary. I decided I’d use the bright, outer, southern star as primary. I was wrong. The southern inner star is considered the “A” star. After discovering this difference a few days later, I decided to transfer my measurements using my digital sketch as a measuring tool. I positioned the stars in my digital sketch using the original measurements I took. I then re-measured them from the correct A star with the tools Photoshop supplies. Most of my extrapolated measurements correspond nicely with 1998 values from Double stars in astrometric catalogs (Wycoff+, 2006).