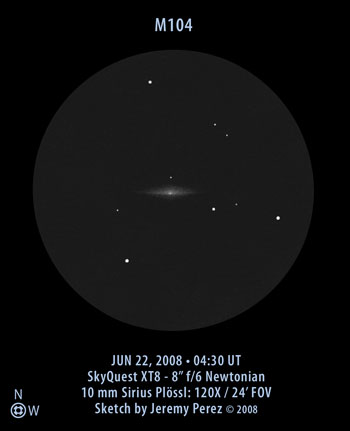 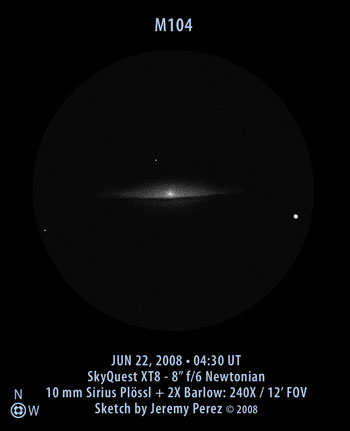 It’s about time I sketched this beautiful, bright galaxy. Once again, I observed from home, which is not the best place to see structure in galaxies–but the Sombrero was very cooperative. It was conveniently aligned at a PA of 90 degrees. The visible extent appeared to be about 1 x 6 arc minutes. At 120X, the sharp drop in brightness along the south edge was picked up again by a subtle, soft brightening. I would not say the dark lane was apparent at this scale, and under these conditions. At 240X however, the dark lane dividing the two regions was visible. The apparent width of this southern section was about 3 arc minutes.

M104, the Sombrero Galaxy, lies about 50 million light years away and is a primary member of the M104 group of galaxies. It is an Sa/Sb type galaxy, seen from about 6 degrees above its equatorial plane. It sports a pronounced dust lane as well as a large population of globular clusters. In 1912, it was found to have a large redshift of 1000 km/sec by V. Slipher at Lowell Observatory. M104 was discovered by Pierre Méchain in 1781.