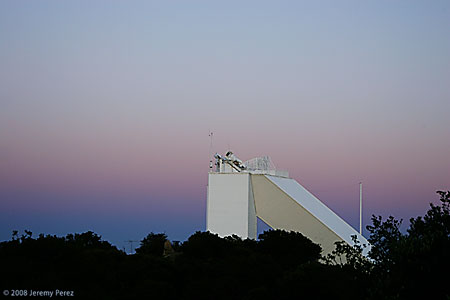 On the evening of Sunday, June 8th, I had the pleasure of visiting Kitt Peak National Observatory and participating in the Advanced Observer’s Program–an overnight observing session with one of the program’s RC telescopes. I attended with four friends, Curt, Rob, Brazos, and Ken. Curt was the mastermind of the trip, and I had the privilege of being the tour guide. We were assisted all night by our friendly scope operator, John Zum Brunnen.

Because the five of us were attending a convention in Tucson, we weren’t able to get to the observatory until about 7:00 pm. That meant we missed the early dinner that normally goes along with the program. But we found John, and he showed us to our dorm rooms and then the cafeteria where we ate our midnight meals a few hours early. The cafeteria was nicely stocked, by the way, and the meals were great.

We were not able to head straight to our dome to observe, however. The way the program is structured, we needed to wait for the Nightly Observing Program to end at about 10 pm (since they use the AOP scopes to tour the NOP attendees). This wasn’t a big deal, since the five-day-old moon was lighting things up nicely. While we waited, I set up my 8″ Dobsonian and 15×70 Oberwerk binoculars for some casual observing at the Visitor Center patio. We shared the spot with a couple German visitors who had broken away from the NOP group to take some long exposures of the Milky Way rising over the striking National Solar Observatory to the east. We checked out some brighter objects such as M4, Omega Centauri, M8, M57, the False Comet in Scorpius, a squirming low-altitude Jupiter, and of course the Moon.

Before long, John showed up to lead us to the 16-inch RC dome. The scope was housed up a curving stairway at the top of a roll-off roof structure. It was spacious enough that the six of us easily fit with room to maneuver back and forth to the eyepiece. The 16-inch Ritchey-Chretien scope is well-suited for astrophotography, but we were there to enjoy visual observing: and it was excellent. Straining for detail through my 6-inch scope made galaxy details in the RC a delight–M51’s arms looked like a pair of sturdy ropes!

John pointed the scope for us by using a computer at one end of the room. Although the computer was operated in ‘dark’ mode, the light from the LCD display was still jarring each time he had to flip it on to re-point the scope. It would be nice if GOTO pointing could be handled with a small, dim hand controller. In the end, it wasn’t a big problem, since we weren’t really hunting extremely faint objects that would call for well-preserved dark adaptation.

The RC was paired with a TEC APO140ED (140 mm, f/7) refractor. For the first hour or so, we enjoyed comparing views through both scopes, but finally had John attach a Canon 20D to the refractor to snag photos of several objects as we observed them.

Here is a list of what we observed (they are only in rough chronological order):

And here are low-res images of the photos we took home with us:

I’m very slowly working my way through those photos to come up with optimized versions. But since each image is a single, three-minute exposure, eliminating noise is fairly difficult–and I’m no master at astrophoto processing. Still, for three-minute single exposures, they look really good to me. When I get them finished, I’ll post the processed versions…(so that you may laugh :-).

The program was very enjoyable, and it was great to see so many showpiece objects through an excellent scope. With five of us observing together, the cost came out to $182 per person. I think it would be nice to try the program again during the winter months to squeeze in a few more hours of darkness and linger on some more wonders of the deep sky.