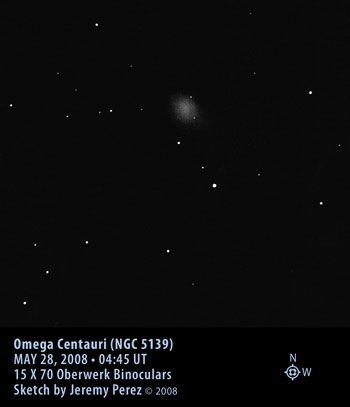 Any opportunity to head closer to Earth’s midsection is likely to get a Northern Hemisphere amateur astronomer salivating at the possibilities. The awesome trip we took to the Caribbean last month brought us down to 19 degrees North Latitude. That’s 16 degrees further south than Flagstaff, and very close to what we enjoyed in Maui last year. Unfortunately, cruise ships are not outfitted for the serene contemplation of nature and nighttime wonders. I have read that some stargazers have found dark nooks and crannies to observe from on cruise ships, but I can tell you that I found nothing of the kind on the Carnival Liberty at night. Standing at the railing 100 feet above the frothing ocean, I can appreciate the desire to keep things well-lit. More than once, I considered what it would be like to get disoriented and flop over the railing, never to be seen again. Yikes.

So that was challenge number one: Brilliant, white light shining everywhere

Challenge number two was clouds. It’s the tropics after all. And with Tropical Storm Alma stirring things up over Nicaragua, we had more fits of clouds than we otherwise would have.

The third challenge was more of a trade-off than a challenge. And that was all the things to do and enjoy, all day and all night on the ship. Hanging out on the upper deck with a tripod, binoculars and a sketch pad was not top on the list of things I hoped to enjoy with my family! One evening did offer a brief window to scout out a good observing spot to have a look at Centaurus and Carina. I almost type “Milky Way” after those constellation names, but honestly, the Milky Way was only vaguely hinted at through all the glare.

My 15 x 70 binoculars did a fine job though as long as I shielded my eyes from the blazing floor lights. Flickering thunderstorms along the horizon kept me from observing or sketching anything in Carina, so I headed over to Centaurus and enjoyed a long look at Alpha and Beta Centauri before working on a sketch of Omega Centauri. Sadly, I can observe this from Flagstaff, but it was much higher here, and it was safe from the clouds long enough for me to grab it as a consolation observation. It felt good to soak in the starlight and touch pencil to paper. No red light was necessary here! And I could refine the shading on the globular easily and to my satisfaction. The binoculars were also a nice instrument for use on a moving ship. The subtle rocking of the ship was barely noticeable, and no hindrance at all to the observation.

Omega Centauri is a large, soft, obvious puff of light amid a spatter of bright field stars. It possesses a slight elongation, and a softly defined luminosity profile. A few people passed by and asked what I was looking at. Unfortunately, the soft light of the globular is a tough object for the uninitiated, light-blinded public, so I gave the binoculars a brief turn to Jupiter to show off its startlingly linear arrangement of moons before returning to my sketch. After finishing the sketch, I hoped to grab another, but the clouds were closing in rapidly. In the few remaining minutes I had, I was able to enjoy a stunning view of the False Comet in Scorpius before everything disappeared.

Weighing in at 5 million solar masses, Omega Centauri is the largest and brightest globular cluster of the Milky Way. It lies 16,000 light years away. A study of 50,000 stars in the cluster show that the member stars formed over a period of 2 billion years and so it contains multiple populations. This leads to the possibility that the cluster is the core of another galaxy that has been cannibalized by the Milky Way.