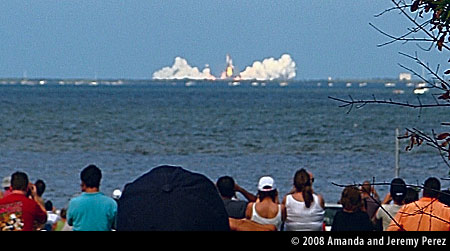 Sometimes, a plan comes together before you even realize what’s happening. While working out the final details of a Caribbean cruise we were planning to take with my immediate and extended family, we realized that the Discovery was scheduled to launch on the day that we returned to Port Miami on May 31st. That was just too much of an awesome coincidence to pass up. So we planned to hustle off the ship that morning and make the 200 mile drive up to the vicinity of Cape Canaveral.

There were eleven of us, including four children, so there was a healthy dose of bathroom, snack and meal breaks involved in the journey. But we got to Titusville about an hour and fifteen minutes before launch. I was worried that traffic would be a gridlocked mess, but it really wasn’t bad–it was heavy, but it was flowing smoothly. The difficult part was finding a place to unload eleven people and park two vans. We finally located a spot a couple blocks west of US Highway 1 and Route 50 and walked back toward the highway. While two-thirds of our group was pit-stopping in a conveniently placed Circle-K, my Dad scouted out and found an excellent spot to view the launch. It was a fair-sized grassy lot that a local business apparently had no problem allowing a couple hundred people squat on while waiting for the launch. From this spot, it was easy to spot launch towers 39A and 39B along with the massive service hangar. Through my 15 x 70 binoculars, a thin strip of the orange fuel tank could be seen behind the tower, but the rest of the shuttle assembly was hidden from view.

I had planned on setting my video camera on a tripod to record a wide shot while I took photos with the digital camera. While setting things up, I discovered I had brought the wrong tripod shoe, so the tripod turned out to be a useless accessory. My wife Amanda came to the rescue, and she gets credit for all the great shots she took with the camera while I shot the video by hand.

One thing I had wrongly assumed is that there would be a lot of people with radios tuned in to hear the countdown. That was not the case. When you’re trying to coordinate kids and cameras, the dwindling minutes can really sneak up on you. Fortunately, some helpful individual on the other side of the field turned up the volume on their radio enough that I caught the sound of the countdown at about T minus 7 seconds. Just enough time to get the camcorder rolling and catch the first puffs of steam billowing to the south from the orbiter’s engines. Five seconds later, the searing cloud from the solid rocket boosters blew out to the north, and slowly the shuttle reared into view.

It is simply awesome to watch that magnificent machine rise up on a blazing, coppery plume of fire and punch through the clouds. It arced quite a bit further north than I was expecting, so we had to shuffle around to see past the trees. About a minute later while it soared behind a cloud, the low rumble gradually grew. It wasn’t as loud as I had hoped, but it still made nearby windows rattle and definitely put a polish on the experience.

Click any of the following images for larger versions. 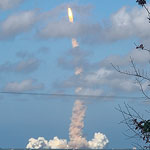 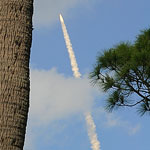 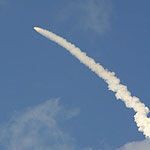 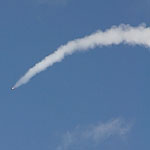 A little more than two minutes into the flight, the SRBs gave a final gush of smoke and fell silent. To the naked eye, the smoke trail faded to nothing, while a brilliant point of light marked the continued progress of the Discovery’s own engines. However, the magnified views of the camcorder and the digital camera show the fainter SRBs peeling away while still trailing the shuttle through the sky. 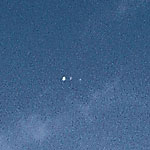 At two minutes and forty-five seconds into launch, that speeding star disappeared behind one final cloud, and the show was over. The kids were definitely as stoked as I was! 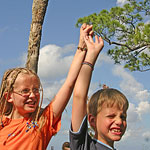 Shortly afterward, we had dinner in Cocoa Beach and met JoAnne whose niece Karen Nyberg was a mission specialist on the flight. She was kind enough to pose with my step mother for a quick photo. (JoAnne is the one with the NASA family member badge 🙂 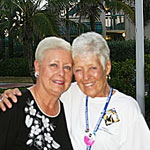 Below are frames from the video. I’m including them because the camcorder was able to zoom in tighter than the camera–so some of the details are easier to see. 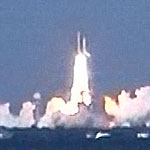 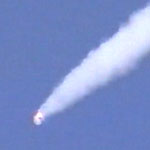 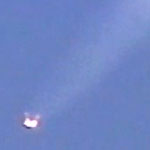 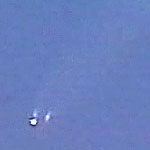 And here is the video:

Two hundred miles for two-plus minutes. It was quick, but it was worth it!