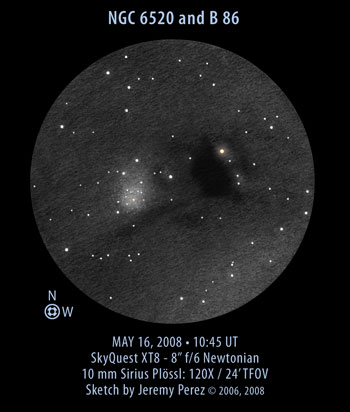 Since I originally made this observation close to two years ago, I’ve been a little concerned by a few of the features I portrayed in the sketch. The elongation of unresolved stars in NGC 6520 didn’t seem to be aligned correctly, and the darker tendrils surrounding B86 didn’t make a great deal of sense compared to photos of the area. Before submitting the drawing for an upcoming article, I figured I better get it together and do something about those nagging concerns.

With the moon growing fuller by the moment, I had a very small window Friday morning to observe this beautiful pair between moonset at 3:10 am, and beginning of astronomical twilight at 3:40 am. So I dragged myself out of bed–I’m still positive that this is unhealthy–and drove out to Sunset Crater National Monument. Unfortunately, a storm the day before had planted a series of long-lasting orographic clouds over northern Arizona. I made a bad estimate of their extent before heading out, and ended up under a thick, unmoving blanket of cloud by the time I reached the entrance to the national park. So I turned back around and headed for a familiar spot closer to town–the Mt. Elden Trailhead parking lot.

Glare from some lights about a mile away was a problem here, but the sky was very transparent, and Barnard 86 made an attractive appearance. The extra couple inches of aperture from the 8″ Dobsonian helped too. Using a tracing of the existing sketch as a template, I started marking in the boundaries the nebula’s dark heart, and fainter reaches. The entire area is mottled with complex formations of Milky Way starlight. I think I could make a week-long project out of observing and illustrating this area in detail. For this observation though, I stuck to the primary structures in the view. I don’t know how I missed the bright orange color to the star on the northwest edge of Barnard 86 on the original sketch, but I made sure to note it here. The nebula’s trapezoidal shape was more evident this time, as I scanned its perimeter. The orientation of NGC 6520 was definitely aligned closer to 180 degrees than in my original sketch.

It wasn’t long before twilight began washing the sky out. But I had what I needed and went home for a couple more hours of sleep before work. Using the revised diagram, I used the dodge and burn tools in Photoshop to touch the original sketch up to match the new observation. I think this updated illustration is truer to the visual appearance of the nebula. For reference, the previous drawing can be found further below in the AUG 25, 2006 entry. 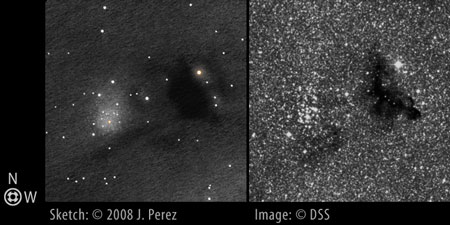 According to Giovanni Garraro, et. al. of the University of Chile, the cluster and dark nebula are assumed to lie at the same distance from Earth, and that this distance is actually 1800 – 2000 parsecs (5870 – 6520 light years). They estimate the age of the cluster at 100 to 200 million years. Due to the difficulty in differentiating stars in the cluster below vMag 18 from the Milky Way field, the clusters population was limited to stars brighter than this. Working from that standpoint, the cluster is given a radius from 0.5 to 1.5 arc minutes–quite a bit smaller than the value given at the NGC/IC Project. It is noted in the paper that this is not a limiting size on the cluster, which could surely be larger if stars fainter than 18th magnitude could be distinguished.

Study of imagery of the region suggests that the dark nebula envelopes the open cluster, particularly toward the south. Star counts were also made of stars in front of the cloud, compared to the number expected to lie within 1, 2 and 3 kpc from the Sun in the direction of the cloud. These counts support the assumption that both objects lie at the same distance. Still, the paper notes “this assumption must be verified in some more quantitative way, which is not possible with the present data.” It was also noted that the 100 – 200 million year age of the cluster does not seem compatible with the associated molecular cloud whose mean lifetime should be more like a few tens of millions of years. If later radial velocity and infrared spectral analysis confirm the relationship, the cloud would be an interesting subject of study as it would represent a stable condensation that has lasted a full galactic rotation. 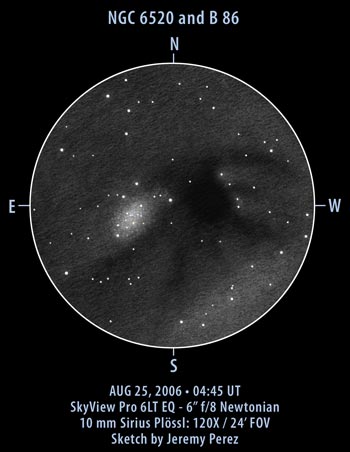 Move mouse over image to see photographic overlay these objects.
Click here for a large version of the sketch (121K).

Do you like to view deep sky objects that share the view with other notable objects? Well, here is one combination you don’t want to miss. Try to catch it from a dark sky if you can, so you can view it in all its rich detail. NGC 6520 is a small, foaming open cluster nestled in the midst of a sprinkled haze of Milky Way stars. Just beyond the western boundary of the cluster lies an oblong pit, denuded of starlight. This dark realm is further bounded on its western edge by a string of four bright stars posted like buoys marking the rim of a bottomless abyss. This perception of depth is of course an illusion. The inky object, Barnard 86, is really a dark nebula resting in the foreground, blocking the collective light of the Milky Way behind it.

I got my first look at this beautiful pair over six months ago at the end of an all night observing session. Earlier that particular night, I had observed and sketched a couple other dark nebulae: Barnard 34 and The Pipe Nebula. My first look at the NGC 6520/Barnard 86 combo readily showed the dark nebula as a small, oval knot. But I didn’t have time to spend on the observation, and wasn’t rewarded with some of the other details the view affords.

While the thickly starred low power view is stunning, these two objects benefitted from a bit more magnification. I chose to sketch at 120X. This provided a 24 arc minute wide field of view that framed them both nicely. The open cluster was elongated, and to my eye appeared to stretch northwest to southeast. As the rollover astrophoto above shows, the cluster actually appears to stretch more directly north to south. At its heart I noticed the warm light of an orange star. The dark nebula was elongated northeast to southwest and sported a sharp boundary along its western edge. Muted, dark tendrils appeared to crawl away from the nebula and merge into the surrounding Milky Way. The most prominent of these pseudopods rested along the southwestern side of the nearby open cluster. The Milky Way reached into the southwestern edge of the view with a brighter fog of starlight that enveloped a string of 10th and 11th magnitude stars.

While the view was very enjoyable, the sketch turned out to be an incredible challenge. A few days earlier, I had been tormented by passing clouds during a lengthy sketch of M8. This time, I not only had to share the view with passing clouds, but I was further enveloped by a level of humidity that was just shy of fog. In the amount of time it took me to sketch the field stars, the paper had absorbed what seemed like a washrag’s worth of water and the blending stump had become rubbery. Sketching a dark nebula in the midst of Milky Way starlight requires a lot of shading. Shading even a tiny spot on moist paper is a nightmare. The paper repels graphite from the blending stump with gusto. I gave it my best shot, but by the time I had roughed in the major areas, the paper wouldn’t take any more graphite. So it wasn’t possible to refine boundaries, even out shading, or deepen shading anywhere I had already shaded. I had to resort to making a separate contour sketch (see below) to note where I would have to refine the dew-damaged sketch later.

The image below shows the original roughed in sketch. If you move your mouse over it, it will give a comparison of the cleaned up sketch. 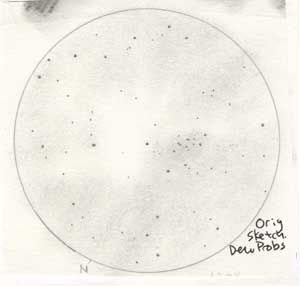 The entire process made me wish I had invested in a pad of Rite in the Rain paper. Normally I don’t need to worry about crippling dew, but I now realize it’s a good idea to be prepared anyway for bizarre occasions such as this.