Move mouse over sketch above to see comparison detail illustration from January 2007. Click the image for a larger version.

About 38 light years away in the constellation Virgo, this pair of twin stars orbit one another once every 169 years. When I last observed them in January 2007, they appeared as a single, elongated, pill-shaped star. Last week, April 10, 2008, the diffraction discs were now clearly separated into two distinct stars with no overlap. Position angle had also proceeded about twenty degrees clockwise since my last look.

During my January 2007 observation, I estimated a position angle of 60 degrees. However, the data in Brian Workman’s Double Star calculator indicated they should have been 49 degrees. I thought this was strange at the time, since I would probably have guessed 45 degrees if that were the case. Recently, I had a look at some more refined data provided by Brian Skiff. Plugging that into the calculator led to January 2007 value of 58 degrees–much closer to my estimate at the time.

For the April 10, 2008 observation, I was able to put the astrometric eyepiece to use on the pair, and arrived at a position angle of 36 degrees. Skiff’s data points to a value of 37.9 degrees. Based on diffraction discs that are not quite touching, I estimated a separation of .92 arc seconds. Skiff’s data comes out to .993 arc seconds.

I was excited to see such a pronounced difference since last year. What a privilege to watch the slow dance of this stellar couple. 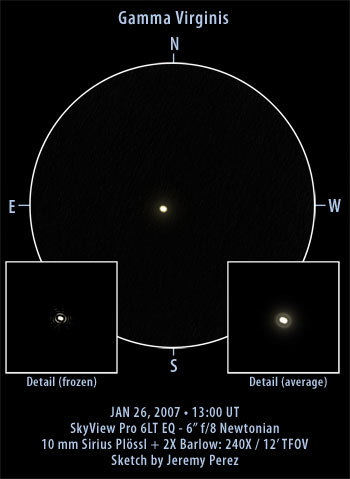 You’ll be taking a dose of your stellar medicine if you observe Gamma Virginis with a 15 cm scope. This close double star appeared pill shaped in my 6 inch reflector. The seeing was great, and the clear, buzzing diffraction rings made for a beautiful impression of this elongated pair. I didn’t see any indentation or peanut shape. Coloration was a subtle ivory. The axis elongation appeared to have a position angle of either 60 or 240 degrees depending on which star was the primary. Running the double star’s orbital data through Brian Workman’s Double Star Calculator gives a PA for January 2007 of 49 degrees with a separation of .75 arc seconds.

The sketch here is a bit different than usual. I have the normal eyepiece circle view, which in this case doesn’t serve much purpose other than consistency with my other double sketches. I also include the detail sketch on the lower right that indicates the elongated shape with typified diffraction ring position. What I’ve added that is new, is a ‘frozen’ detail sketch in the lower left that gives a snapshot impression of what the diffraction rings and diffraction disc looked like to my eye. You may want to click the image for a larger version to better see this.