All’s still quiet on the sketching front. However, I was able to catch a mag. -7 Iridium Flare outside my front door last night. It’s amazing how bright these things get. And…it’s easy to see how someone seeing a flare for the first time might easily add it to their dusty list of UFO-shooting-the-bull stories–

“Yeh shoulda seen it Marty! It was movin as smooth as quicksilver through the ether, and gettin brighter the whole time. It finally got so bright, I could feel the gravity of it pulling me upwards. But before they could bring on the probes, somethin else musta caught their attention as the light began to fade just as quickly. Quiet as a church mouse it was. Never seen the like…”

It makes me wonder, if you were nicely dark-adapted, and situated on a well-placed bluff or mountaintop–could you see the subtle path of the satellite’s reflected light racing across the landscape? Not that I’m ever going to go out of my way to find out…

I decided to take a photo of it, but as is usually the case, I waited until the last minute to race around looking for the tripod, to hurry through a dicey focusing job, to realize that the tripod boot on the camera was loose and wiggley, and to find that the tripod legs were nearly frozen in place from sitting in the trunk of the car. As I tried to coerce everything into place, I could see the satellite quickly making it’s way southward toward Lepus. Hoping for the best, I gave up on trying to compose the shot and just let it fall where it may. The result: a lopsided tree, and a flare that hangs against the edge of original, uncropped version of the photo: 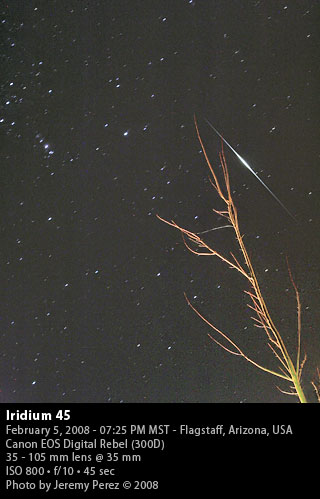 I’m mildly satisfied with how well the flare was exposed. There are some interesting ripples in brightness that can be seen in the fainter portions of the flare. Maybe a result of different cells of the solar panels catching the sun’s light at slightly varying angles as it flew southward. Next time, I might just convince myself to prepare an extra 30 seconds sooner. Here is a better look at it: 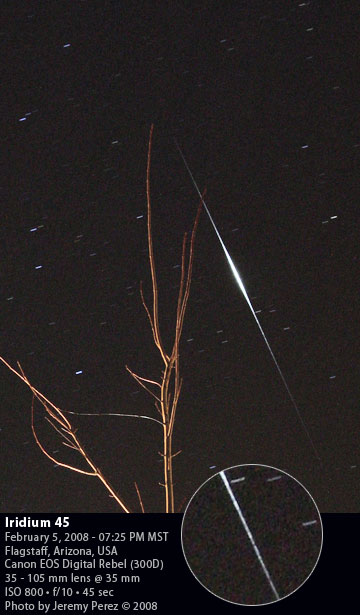