A few months ago, I invested in a Meade 12 mm Astrometric Eyepiece that I could use in measuring double stars. I calibrated the eyepiece scale in June, and have used a few times since them. I’m definitely at the novice stage of using this eyepiece to measure doubles, but I wanted to pull together a tutorial describing the process I’ve used so far. I based most of this on the article “Observing Double Stars for Fun and Science” by Ronald Charles Tanguay in the February 1999 issue of Sky and Telescope. Tanguay’s article recommends calibrating the position angle circle at the beginning of an observing session and using that throughout the session. Because I’m using a Newtonian telescope and need to adjust the position of the OTA in the tube rings as I move to different portions of the sky, I wouldn’t be able to retain that calibration from one double to the next. So the method I describe calibrates the PA ring for each double observed.

As I use this process to measure more doubles, I’ll be comparing my values to WDS values along the way to see whether I’m getting better with measurement accuracy. According to Tanguay, measurements of stars separated by about 1 arc second should vary no more than +/- 10% for separation and +/- 5 degrees for PA. For widely separated stars in the vicinity of 100 arc seconds, separation should vary no more than +/- 1% and PA by no more than +/- .5 degrees. Any suggestions for improvement in the method I’m using are appreciated.

1) If the protractor has a central brace, cut most of it out leaving just the outside plastic circle intact. 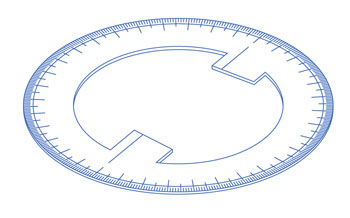 2) Tape this circular protractor to a sheet of foam core and then trim off the outside edge of foam core material. 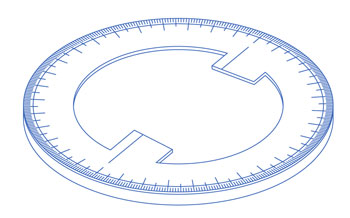 3) Using the 0/90/180/270 degree positions on the protractor, carefully draw bisecting lines at right angles across the foam core to mark the center of the disc. 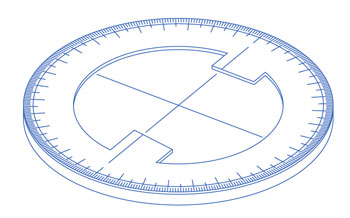 4) Measure the outside diameter of your barlow just below the locking screw (hopefully it is the same diameter as the top of the barlow, since this will make measuring easier).

5) Subtract 1-2 mm from this diameter (for a snug fit) and use a circle template or compass to draw a circle centered on the mark you made in step 3. 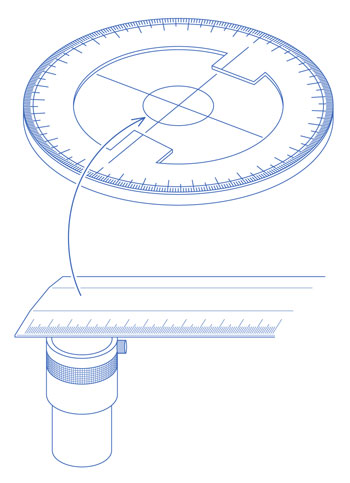 6) Use a pen knife/Xacto knife to cut a hole in the disc where you marked the circle in step 5. 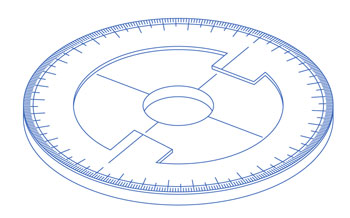