One of the great values I attach to astronomical sketches is that they can help convey what an object looks like visually much better than a photograph can. However, there are some caveats I’ve been wanting to discuss. What you see in a well-executed sketch is not necessarily what the object will look like when you first peer into the eyepiece. Of course, there are a number of variables that can affect what you see, including equipment used, atmospheric conditions, light pollution, and level of experience. But even if all of these variables are equalized, the view of an object through the eyepiece will not always be as detailed and robust as it appears in another observer’s sketch.

I think it is important to distinguish between what an object looks like as a whole, or at-a-glance, compared to what it looks like when your compile a half hour or more of accumulated observations across the entire object. This is especially true of subtle, extended objects like nebulae, galaxies, comets, solar phenomena, and planetary albedo features. This composite view is what many observers try to accomplish with their sketches. By spending ample time, gradually pulling numerous details from the object, an observer is able to slowly build up a picture that contains much more structure than a normal gaze will allow.

To demonstrate, here are some progressive images of a sketch I made of M17 a couple summers ago. To better convey the subtle impression of structures seen in the eyepiece, I’ve kept contrast low–so it will be helpful to view the images with as little glare on your screen as possible.

This first image shows how the nebula may appear at first glance: 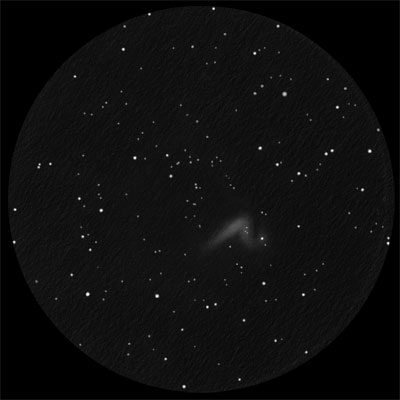 The next image shows what you may begin to see under good conditions as your eyes grow accustomed to the view. The “swan” shape becomes more apparent, and a soft glow may begin to appear above the swan’s back, and to the northeast of its body. 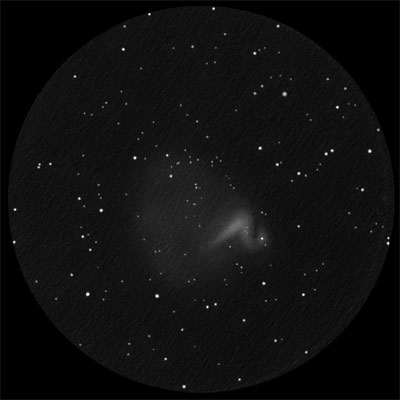 If I were to finish the sketch there, it might very well represent the basic appearance of the nebula through the eyepiece. But there is still more detail to be observed. The following animated image shows the individual details I noticed while using averted vision to pry into the mottled glow. The animation lasts about ten seconds before starting over again.

As you can see, much of the finer detail is not observed all at once, but is picked up in pieces. By gradually adding these pieces together I am able to build up a composite sketch that describes all of the details I was able to observe.

In addition to including all of these separate details I also tend to increase the contrast of the finished sketch for a couple reasons. First, I apply a bit more contrast to the pencil drawing itself so that real details stand out above any unintentional irregularities caused by the paper or shading process. I also increase the contrast of the scanned image, since I know that people will be viewing the images using a wide range of monitors with glare and conditions that are often less-than-ideal.

This last image shows how I chose to present this sketch: 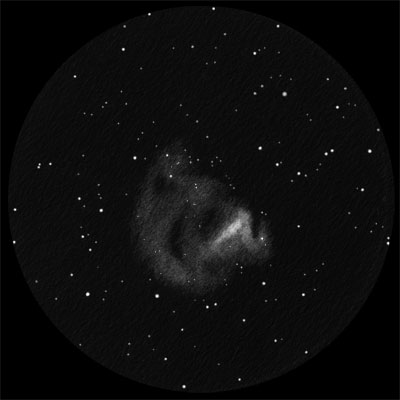 So, although the sketch may appear more obvious than the object looks all-at-once through the eyepiece, it does achieve my goal of presenting all the details I observed during the two hours I spent observing the nebula.

Given more time, I would love to produce both an at-a-glance version and a detailed version of every sketch to convey what an object looks like at first, and what can be discerned with more time and effort. For now I’ll be sticking with the detailed versions.

8 Replies to “How Well Does a Sketch Represent the Eyepiece View?”