After discussing how the annular appearance to the coma of 17P / Holmes may be an illusion, a very good point was raised. I was directed to some images of the comet that very clearly show a distinctly brighter ring around the edge. Checking values in Photoshop showed that these elevated brightness levels were real. However, these particular images had also been strongly processed to bring out some subtle but fascinating details in the coma. I’ll say right away that I don’t know how the original images looked compared to the processed versions, so my following assumptions are open to being corrected on getting more details. However, I’m pretty sure that the processing used in some cases can cause the edge of the coma to develop a brighter ring that wasn’t actually there in the original.

One of the key ways that images are enhanced is by strengthening the appearance of hard or even soft edges. In order to do this, the darker side of the edge is darkened even more while the lighter side is lightened more. This makes the edge stand out much easier and is a very useful tool. Below is an image that demonstrates what happens. The upper portion is unprocessed; the lower portion has unsharp mask applied to it. The black lines show how the luminosity changes across that edge. 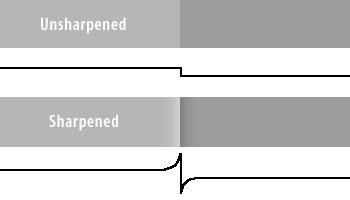 So I built a fake comet in Photoshop. The comet has an outer circle that is not annular (although I think the illusion is still very noticeable). The luminosity profile is charted below (the brighter the image, the higher the graph goes). By moving your mouse over the image, you can see what happens when I apply a wide-radius unsharp mask to the image, it actually puts a bright ring around the outside edge in its effort to enhance the transition. The graph shows that the ring is no longer an illusion, but has become a real part of the image. 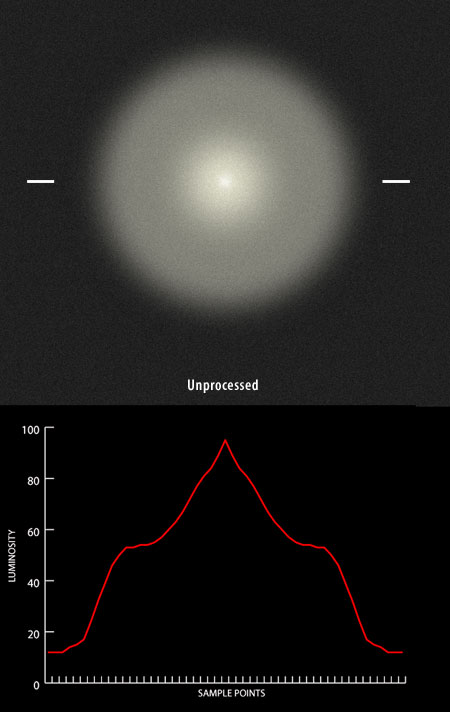 Move mouse over sketch above to see processed version.

Like I said, I have not seen the before and after states of the comet images that display this effect, so I could be wrong and annularity may have actually been present. Nor do I think that processing is unwise, because it can really help to emphasize subtle irregularities that would otherwise be unnoticeable. I think it’s just important to know what can happen when images are processed because some of what gets altered can lead to potentially incorrect assumptions about the object.