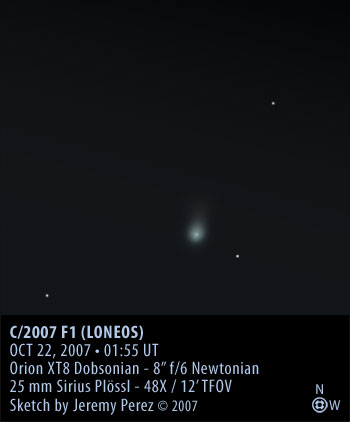 Driving back from Phoenix with the latest addition to our telescope family (an Orion XT8 Dobsonian!), I took a detour to McMillan Mesa with the kids to have a look at C/2007 F1 (LONEOS). Although the heavy-hitting NEO surveys like SWAN and LINEAR are catching the majority of the newly discovered comets and asteroids, this one was picked up by Flagstaff’s own LONEOS observatory on March 19, 2007. It’s a horizon scraper and is currently glowing at magnitude 6. When we arrived at the top of the mesa, I broke out the 15 x 70 binoculars and hunted it down in the blue-gray twilight between Arcturus and the trees along the horizon. It was nestled just outside the hypotenuse of a right-triangle of stars that included 14 and 18 BoÃ¶tis. The comet’s soft glow had a slight hint of turquoise, and displayed a sharp central condensation.

Since it appeared so clearly through binoculars, I quickly set up the XT8 and gave it a shot. The coma displayed a more prominent turquoise color, with an almost stellar core. As I hunted for evidence of a tail, I began to detect an elongation pointed north, at a PA between 0 and 345 degrees. The broad appearance suggested I was seeing a dust tail rather than the ion tail. It was not very distinct, but I was surprised to find it pointing almost directly north. Worried that I may have been hallucinating, I checked out some recent observations when I got home and noted that others were noting a similar position for the dust tail. Because I wasn’t prepared to make a comet observation, I made rough sketches with pen on the back of a folded sheet of paper, and then recreated the sketches digitally at home. Because of the hurried nature of the sketch, the telescope observation isn’t displayed with an eyepiece field stop for reference.