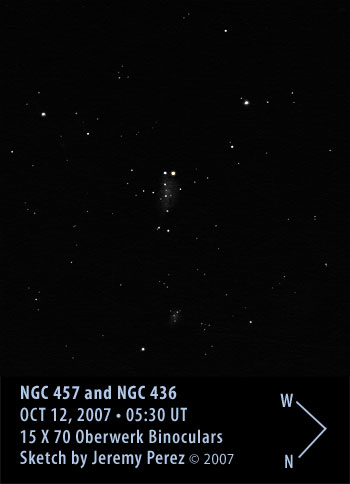 On the night of this observation, I settled in for a nice long look at NGC 457 and nearby NGC 436 with my 15 x 70 Oberwerk binoculars. I used my mirror mount which allowed me to sit comfortably and look down while sketching. (The sketch above has been flipped back to normal orientation.) The field was rich with stars of all magnitudes, but the two glowing eyes of NGC 457 were the show-stoppers. The brightest of the two appeared golden yellow, while the other one appeared subtly blue in contrast. The body of the cluster glowed softly with unresolved starlight while brighter chains of stars extended outward. To the southeast, the subtle mist of NGC 436 was stationed like a recently abandoned perch for it’s larger, brighter neighbor.

104 stars are plotted in the sketch. Twenty of these are in the vicinity of NGC 457 and five within the body of NGC 436. I drew the sketch on a 9″ x 12″ sheet of premium recycled Strathmore Drawing paper with a 2H lead.

NGC 457 was discovered by F.W. Herschel in 1787 and is also catalogued as Cr 12, Mel 7, OCL 321, Lund 43, H VII-42, h 97, GC 256. This cluster has also been called the Kachina Doll Cluster, the E.T. Cluster, the Owl Cluster and the Nazgul Cluster. The brightest star in the cluster, Phi Cassiopeiae is not a member of the cluster, but a foreground star instead.