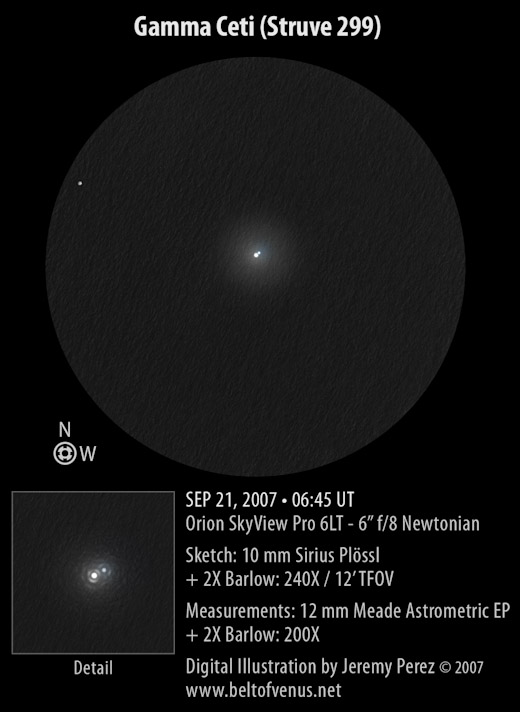 At the neck of the circlet of Cetus lies a close double star with a noticeable difference in magnitude. The primary star is about 9 times as bright as its companion and appeared white to me. Its spectral class of A2 agrees fairly well with this. Its fainter companion appeared to be a dull blue gray color, but according to the 13th General Catalogue of MK Spectral Classifications (Buscombe 1998), the secondary is an F3V star and definitely not blueish. My separation estimate was hindered by jumpy seeing, but I noted about 2 arc-seconds. The WDS measurement from 1825 was 2.7″ and the Hipparcos measurement from 1955 was 2.8″. I measured a PA of 299 degrees. The WDS PA from 1825 was 289 degrees, and the Hipparcos PA from 1955 was 194 degrees, so the PA I measured is probably fairly close to the current value.

So much for my research…Jeff Burton’s Astronomy Blog notes that the primary is yellow and the secondary blue. He also notes 2002 values of 2.3″ separation and 299 degrees PA. This is in much better agreement with my observation. I’ll need to dig into the resources he used to see where that data came from.