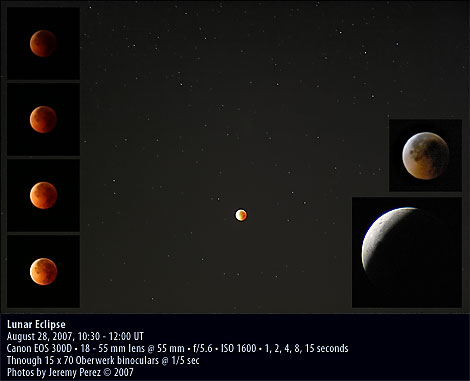 Setting my alarm for 2:30 in the morning offers a slim chance that I will actually wake up for it. This morning, I’m glad I did. In Arizona, today’s Lunar Eclipse totality ran from about 2:52 to 4:22 am. It was a beautiful sight. Although I took a brief look out the front door as the Earth’s shadow ate into the moon, I snoozed a bit longer, and headed back outside around 3:30 am to see a dark coppery moon hiding in the southwest sky. I brought the family out one stumbling person at a time to take a look, before settling in for some photos and long observations through my 15 x 70 Oberwerk binoculars.

The above image features a wide photo with the backdrop of stars showing. On the left side are a series of inset photos taken with different exposure lengths to show different levels of subtlety and detail (1, 2, 4, and 8 seconds respectively). The two inset photos on the right were taken through the eyepiece of my binoculars as the eclipse was ending.

The view through binoculars was amazing. The moon appeared lit from within, like a smoked kerosene lamp with a nearly extinguished flame giving off its last light. As the umbra finally slid away from the Moon’s western limb, another fantastic color contrast lit up the scene. The moon ranged from dull, brick red in its eastern maria, to coppery tones in the highlands, and then to subdued yellows closer to its center, and then a neutral gray toward the edge of deepest shadow. On the other soft edge of the shadow, the clean white and light gray shades beckoned to wake up the rest of the Lunar surface.

The photos I took cannot capture the vivid range of color and luminosity, so I also worked up a sketch. I’ll post it as soon as I finish prepping it. Early-morning wake-up calls are not a favorite of mine, but this was absolutely worth it.

Another interesting feature of the morning observing session was noting three bright meteors that seemed to originate from the vicinity of Auriga. I didn’t try to precisely trace them back since I was otherwise preoccupied with the Moon. But it might be a good sign that the September 1 Alpha-Aurigid meteor outburst might actually be good. Here’s hoping. I’ll try to get up early for that one too…