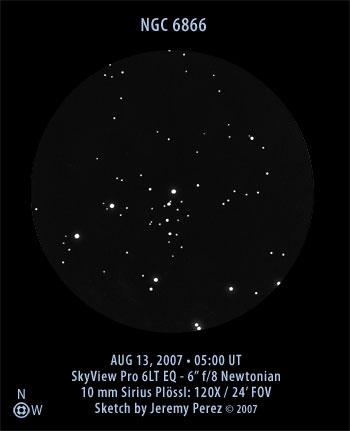 Move mouse over sketch to view the impression this cluster left on me.

Passing high cirrus gave me grief during this observation. Giselle and some other kids in the neighborhood hollered as Perseid meteors streaked across the sky. After plotting 34 framework stars, I had to restart the sketch when the EQ mount ran aground against a tripod leg. I couldn’t reorient myself well enough after re-centering on the other side of the tripod to pick up where I left off. So I started over.

My first impression of this cluster at high power was of a soaring bird due to some strings of stars extending east and west with the head to the south. The body of the cluster is arranged in the shape of an arc concave to the west. It appeared to be about 5 arc minutes north to south, and about 3 arc minutes east to west. The sketch shows 19 stars in the body of the cluster and 73 stars in total.