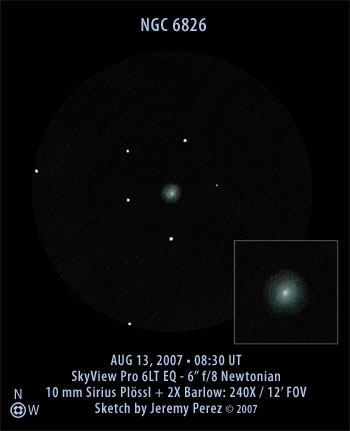 NGC 6826, also known as the Blinking Planetary, was pleasantly bright when I tracked it down at low power. It exhaled a blue-green color at all levels of magnification. At 240X, it displayed a shelled structure with an outer shell that appeared circular while the inner shell was elongated at a PA of about 135 degrees. This inner shell was bright enough to make the central star appear to almost blend into it. I did not notice a blinking effect on the nebula, but detail was lost to direct vision. I estimated its diameter to be about 40 arc seconds. This estimate turned out to be fairly poor, as the actual diameter is 27 x 24 arc minutes. If you’re in the area enjoying M27 and M57, reward yourself a look at this beautiful planetary nebula too.

NGC 6826 was discovered by F.W. Herschel in 1793. High resolution photographs reveal an elliptical nebula with an eye-like appearance. Between the inner and outer shells, along the long axis, two red “FLIERS” can be seen. The cause of these structures is yet to be determined, but Hubble telescope images seem to indicate that these FLIERS are stationary while ejected stellar material flows past them–sculpting them in the process. NGC 6826 is also catalogued as PK83+12.1, H IV-73, h 2050, GC 4514.