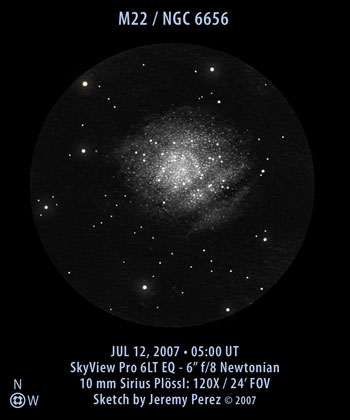 I was feeling pretty worn out when I made the trip to Anderson Mesa and wasn’t sure that I wanted to tackle a monster observation like M22. But I’m glad now that I did. It really called for a lot more detail than my previous observation and sketch gave it. This globular cluster really is huge. At 120X, it occupies a large portion of the view, and I would estimate its visible dimensions at roughly 11 arcminutes in diameter. It is resolved all the way across its surface. Clumpy structure can be seen in its brighter core, and ribbons of light and dark can be seen running across its grainy outer halo–most prominently on its southwest side. A bright orange star marked the northeast edge of the field. The sketch took about an hour and twenty minutes to complete at the eyepiece, and another twenty minutes refining the stippling indoors later.

At 10,400 light years distant, M22 is one of the nearer globular clusters. Its angular diameter is slightly larger than the full moon and works out to 97 light years in diameter. It is receding from us at about 149 km/sec. Recent Hubble Space Telescope investigations have led to the discovery of a number of planet-sized objects that appear to float through the cluster. They have masses of only 80 times that of Earth and were discovered from the gravitational lensing of light from the numerous background stars they pass in front of. M22 was most likely first discovered by Johann Abraham Ihle in 1665, and later cataloged by Charles Messier in 1764. 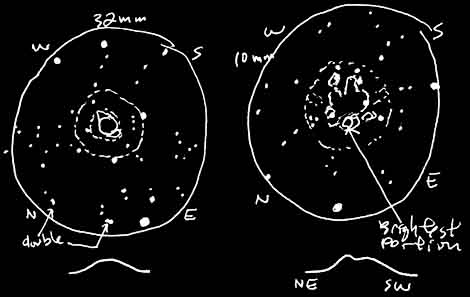 This globular cluster is large, even at 37X. There is granularity across the surface. The large outer halo of stars is diffuse at this magnification. The core seems elongated west to east. I count about 20 obvious stars across the surface. Although seeing is bringing them in and out. The 10 mm/120X view showed the cluster core to be irregular in shape–not so much a ray structure, but more mottled. A darker lane runs across the NE end and on the outer side of this lane is the brightest section of the core. Granularity extends across the face and further to the edges in this view. Most stars are blinking in and out with the bad seeing. The largest number of constantly visible stars seemed to be on the SW edge.