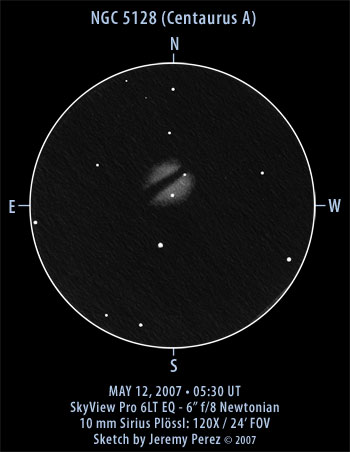 This was probably the fourth time I’ve made a telescopic observation of Centaurus A, but I finally got down to business and made a sketch this time. I was observing at Cinder Hills Overlook with Eric Graff, his family, David Sanders, and Scott & Dena Garfinkel. Everybody seemed to be enduring the gusting wind fairly well, but it made high-power observing an irritating challenge. Eric was tracking down exceedingly faint objects in Centaurus, but I was frustrated enough by the wind and my lack of preparation that I decided to work on this bright obvious target first.

The galaxy is easily visible through my 15 x 70 and 10 x 50 binoculars. The view through my 6″ reflector brings out the fascinating dust lane that bisects this bright galaxy. This lane runs from northwest to southeast and appears widest at its southeast side. The southwest hemisphere of the galaxy appeared larger than the northeast. A bright star was superimposed over the southwest half, and another star anchored the rift at its northwest edge. The galaxy’s size is listed as 25 x 20 arcminutes, but I only saw 3 arcminutes of its bright core. It was about 11 degrees above the horizon (as good as it gets from here) and that probably didn’t help.

NGC 5128 was discovered by James Dunlop in 1826. It is a strong source of radio radiation and is the nearest radio galaxy at a distance of 15 million light years. It is categorized as an intermediate galaxy type, with qualities of both an elliptical (which describes its main body) and spiral galaxy (due to the prominent dust band encircling it). Loads of information about this fascinating galaxy can be found at the solstation website.