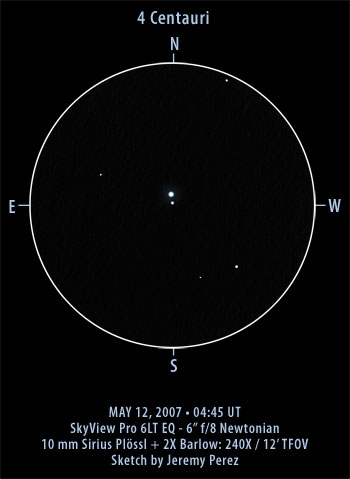 After a blustery evening attempting to observe at Cinder Hills Overlook (Sunset Crater National Monument), I gave 4 Centauri a try. At low power, this double appeared to have a cream colored primary and a blue-gray secondary. At 240X however, the color of the primary appeared to be an aqua color instead. I checked with Eric Graff, who was observing with me through the relentless gusts, and he noticed the same high power vs low power color effect on this double through his scope (a 6″ f/6 Parks Astrolight). PA appeared to be 190Â° with a separation of 20 arcseconds. WDS values are 185Â° and 14.9 arcseconds. Spectral types are B5V / A3V, so the high power view was the most accurate for color estimation.