I figured the binocular sketch I made of the comet and M13 a few months ago ought to be redrawn. It was done on plain laser printer paper, and which didn’t handle the shading very well. Below is the new sketch, created on Strathmore sketch paper at a size of about 8″ x 10″. The star field was traced from a chart produced by Starry Night Pro. I left the previous sketch further below for comparison. 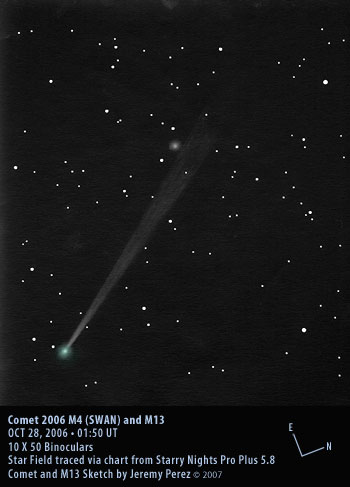 Realizing that the comet would brush M13 with its tail this evening, I set up my telescope in the back yard, got the binoculars and camera ready, and printed out a star chart of the area. I began with a binocular observation that showed the tail very faintly reaching up to barely brush past M13 on its west side. As it did the night before, I noticed a subtle blue-green glow to the coma. The sketch is shown below. 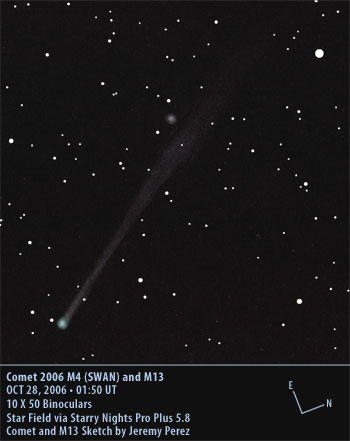 Next I went over to the telescope and was very pleased to see this comet was breathtaking with a little aperture put on it. The color of the coma was strongly greenish-cyan. At 37.5X, the coma seemed to sport a fan shaped dark region opposite the tail. The ion tail peeled away at a PA of about 35 degrees. The coma itself seemed to fade into a possible short dust tail at a PA of about 10 degrees. A stellar pseudo nucleus burned at the heart of the coma. A magnification of 240X still showed the greenish-cyan color, and with time, I saw what I thought were some spokes of brightness at varying positions. I still picked up what seemed to be a dark fan-shaped region in the anti-tail position. Sketches are shown below. I made the high-magnification sketch first. The structure in this high magnification view was very subtle, and may have been an illusion. Perhaps some detailed astrophotos that don’t over-expose the coma will help me determine how valid those observations were. 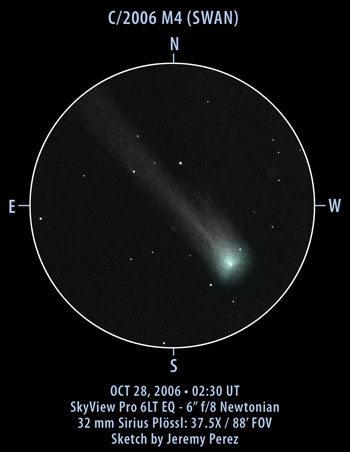 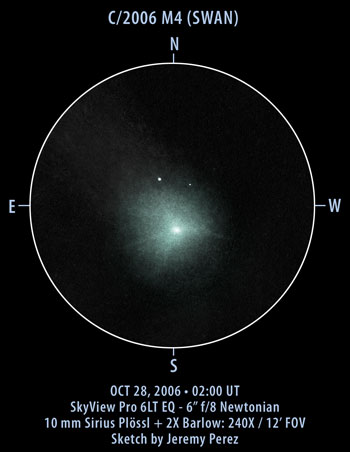 After working up the sketches, I decided to give some astro photos a try. The ion tail is faintly visible running to the west of M13, and proceeding for a couple degrees past it. The shorter dust tail is also visible exiting the north side of the coma. I’ve been having trouble processing the photos without overemphasizing the noise, so I’m posting rollover images below. Move your mouse over the image for a more brightly exposed image with labels as well. 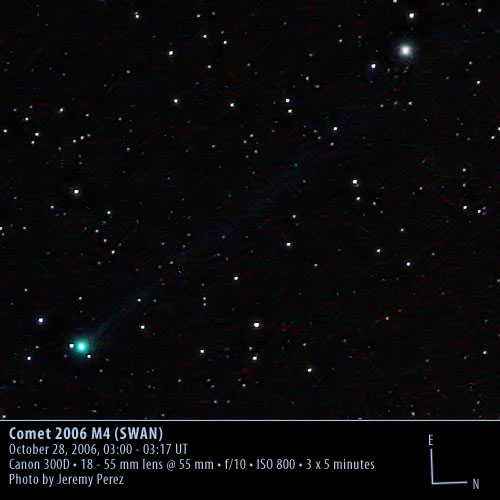 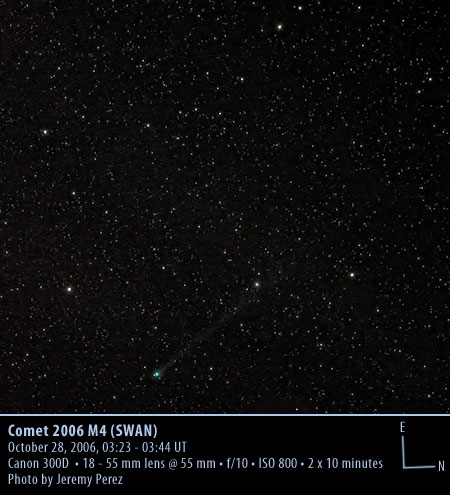 Examining the color channels in the unedited images shows the coma to be strong in both the blue and green channels, while the tail is strong mainly in the blue channel only. After processing them, the blue color of the tail has dropped away, and means I’ll probably be revisiting these images again later.