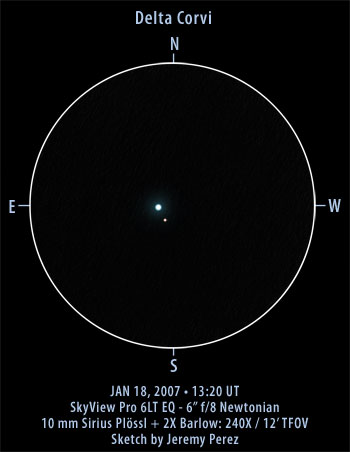 Have you ever seen a brownish-gray star? Probably not if it wasn’t plunked down right next to a bright, colorful companion. This pair featured a pale sky blue primary with a secondary that appeared brownish-gray by comparison. According to the Catalog of Stellar Spectral Classifications (Skiff, 2005), this secondary is a K2V star which is an orange star similar to Arcturus. However, because it is rather faint (mag 8.5) in comparison to its bright neighbor (mag 4), that orange came across to me as a much less saturated brown color. PA during my observation appeared to be 210Â° with a separation of about 30 arc seconds. WDS values from 1823 are 214Â° and 24.1 arc seconds.