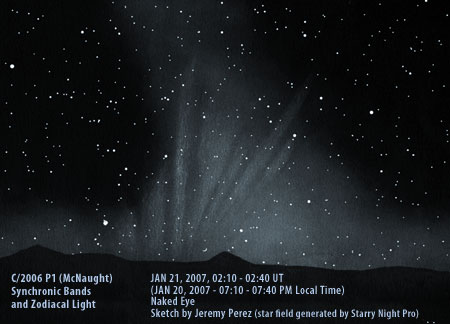 Above image is created with charcoal on a preprinted starfield from Starry Night Pro, and then inverted to a positive image. Click image for a larger version (92K) 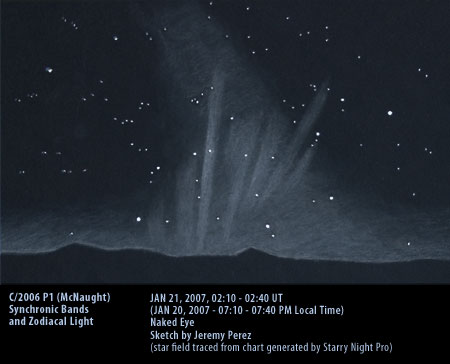 Above image is created with white ContÃ© pencil on black paper with a pre-traced starfield from Starry Night Pro. Click image for a larger version (64K)

Well, just when I thought this amazing comet would finish the rest of it’s presence in the southern hemisphere as a spectacle I would only be able to enjoy through photos, it pulled another surprise. Remnants of its huge tail began to be observed by observers in the northern hemisphere. A very rare feature, sometimes called synchronic bands, began to appear and to drift away from the sun. For those in the southern hemisphere, this makes for an unbelievably gorgeous sight in the evening sky. For those of us in the mid-northern latitudes, it presents an opportunity revisit this beauty for a bit longer.

After analyzing various recent photos of the comet from the southern hemisphere, I printed out a star chart, and marked the area in Piscis Austrinus where the most northern segments of the tail fragments were last imaged. I printed out a couple more sheets to take with me for sketches, and headed north of town to escape more stubborn clouds. After a 30 mile drive to Wupatki National Monument, I entered the park and drove in search of a parking spot with a good view of the western horizon. About 4 miles down the empty park road, I was surprised–but then again maybe not too surprised–to find Brent Archinal parked along the side of the road with his tripod and camera set up. Whaddaya know! So I set up next to him and waited for twilight to darken while enjoying a beautiful view of Venus and the crescent Moon setting together.

By about 6:50 PM with the sun about 14 degrees below the horizon, and the head of the comet 19 degrees below, a bright spoke began to show itself midway between Fomalhaut and Venus. It was amazingly long–about 20 – 25 degrees from the horizon up to Phi Aquarii. As the sky darkened more, and the Zodiacal Light became very prominent, more bands began to appear in a fan running from Piscis Austrinus through much of Aquarius. I finished shooting several photos at 7:05 PM when my batteries ran out. (I’m all about great planning.) I then spent the next half hour sketching every bit I could detect, which turned out to be a very good investment. My photos didn’t turn out well at all, and the sketches showed much more detail than the best shot (which can be seen below).

You’ll notice not one, but two sketches above. Both make use of a pre-printed star chart from Starry Night Pro so that I could concentrate on the comet tails during the limited time before it set. The first is a charcoal sketch using a chamois to blend in the zodiacal light and skyglow above the horizon. I then used a blending stump to add the synchronic bands. The second sketch is made with ContÃ© pencil on black Strathmore Artagain paper. I traced the stars onto the paper from the same starchart, and then used a blending stump to add both the Zodiacal Light and synchronic bands (since the Chamois didn’t seem to work so well there). I’m definitely partial to the results of the first charcoal sketch. The ContÃ© sketch does look better in person though. 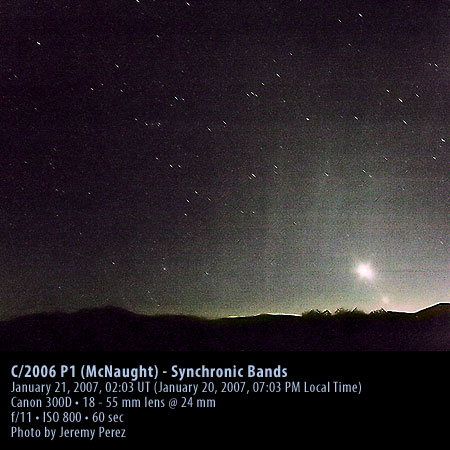