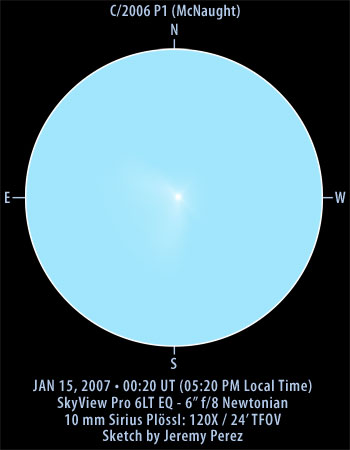 Really! It’s strange to imagine observing a comet in broad daylight. But this McNaught is brilliant. Reports had been coming in for the last two or three days that observers were picking it up during the day. But the weather here had been snowy and cloudy until today. However, there was one standing wave cloud that kept hanging over the east side of Flagstaff for hours. So I tore away and headed to the west side of town to get away from it. At Thorpe Park, I found a small ramada to serve as a sunblock and started scanning with my 10 x 50 binoculars at about 3:45 in the afternoon. Suddenly, there it was, a bright speck in a field of bright blue. A wide, faint bow with a bit of layered structure enveloped it, blowing away eastward.

I set the binoculars up on a tripod, and enjoyed a nice steady look at it. After some time spent on my knees in the snow, sketching the view, I decided to give it a try without the binoculars. By using some foreground landmarks, I was finally able to spot it as a faint, intermittent white speck buried in the solar glare. I didn’t even have to use my corrected glasses to pick it up. The sight of this white speck against a blue-white sky wasn’t very stunning, but knowing that I was seeing a blazing comet, rounding the Sun in full daylight made it pretty amazing. A passerby asked what I was checking out and I offered him a look through the binoculars. He spotted it pretty easily, said he had heard about it, but had no idea it would be visible while the sun was still up.

When I arrived home, that obnoxious cloud was gone, and I hurried to set up my scope before the Sun and comet set behind my less-than-ideal western horizon. Using a telescope on it proved to be a challenge. If I set the scope up behind the shadow of a wall or rooftop, the comet would quickly set behind that same object before I could spend much time observing it. So instead, I attached my makeshift solar filter and aimed directly for the Sun. Once there, I slewed the equatorial mount 5.5 degrees east and 2.5 degrees south. I then removed the filter, and with very minimal and cautious scanning, found the comet again. The low-power view turned out to look not much different from the binoculars. Likely due to more extinction from the progressively lower altitude of the comet, along with some very high, thin clouds that were drifting in from the west.

Switching to a high power, 120X view proved to be interesting. The wide beginnings of the tail could be seen, along with a soft, bright coma, and what appeared to be a couple of anti-tail jets. These were very subtle, and may have been diffraction spikes, but I didn’t have time to adjust the rotation of the OTA to find out. Check the sketch above and see what you think. I was able to share the view with my wife, who was surprised by how bright it appeared, and also curious that the tail looked different from the sketches I had made last week. I explained that because the sky is so bright, we are only seeing the very tip of the rounded coma and the beginnings of the tail, so overall it looks fatter. Finally, I managed to grab a few afocal shots through the 25 mm and 10 mm eyepieces. The stacked, and definitely low-quality images can be seen below. (I’ve severely heightened contrast and darkened the sky in the process to show as much of the comet as possible.) 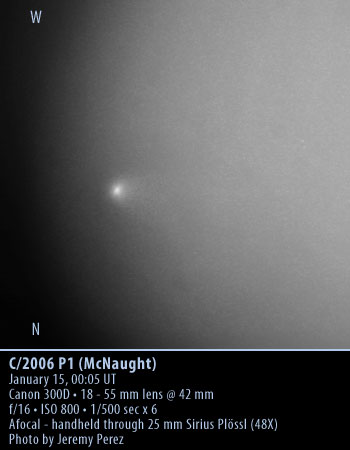