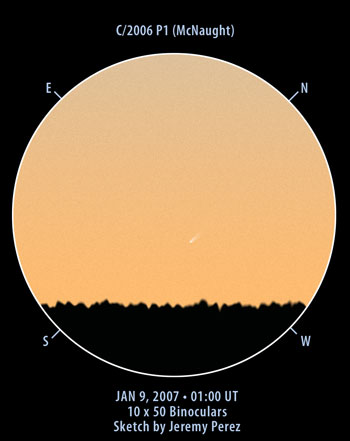 A couple unsuccessful attempts to view this comet from home at sunrise and sunset the last couple days, lead me to drive up to Switzer Mesa after work today for a better horizon. Finding the comet was not easy in the sherbet orange twilight. I scanned the horizon for about ten minutes with my 10 x 50 binoculars before finally spotting it. Once spotted, it seemed very obvious. A frightfully cold wind, and the fact I didn’t bring my tripod mount for the binoculars meant I wasn’t getting the steadiest views propping them against the car. It was still a beautiful sight.

The coma was soft-edged with a broad profile of luminosity. The tail fanned gracefully away from the blunt, parabolic nose, fading away what I estimated to be about a half degree from the coma. The tail seemed brightest along its eastern edge with a brighter core to the tail that favored the eastern half of the fan. I wasn’t equipped for a proper sketch, and time was very short, so I made a contour diagram and reproduced it digitally in Adobe Photoshop at home using the diagram as a reference.

While I was observing it, my cell phone rang, and Bill Ferris was on the other end asking what I was up to. “I’m out at Switzer Mesa, freezing my butt off, checking out this comet,” I told him. He mentioned he was seeing the coma naked eye, and asked if I had tried it. I gave it a shot, but couldn’t pick it out. After hanging up, I got my stargazing glasses and gave it another try. With the glasses on, it showed up very subtly near the ragged line of trees along the horizon. I also grabbed a few shots with my camera and managed to pick out the comet in four of the images. The best one–which still isn’t great–is shown below. Hover your mouse over the image to show a contrast-enhanced version. 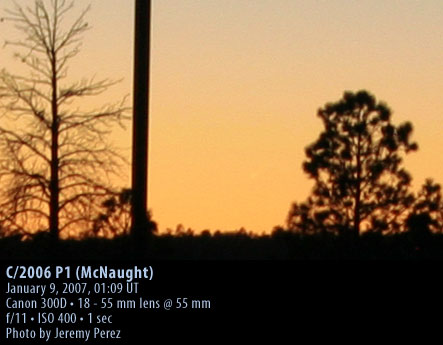