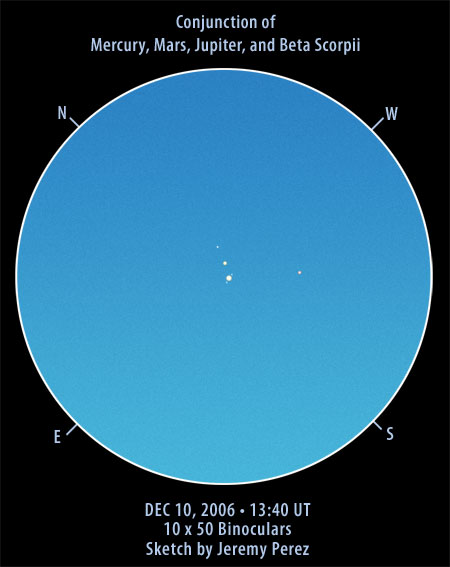 Move mouse over above sketch to view labels. Click the image for a large version to better see Jovian Moons (100K).

Oh boy did I have a hard time waking up for this one. I didn’t have time to drive out to Sunset Crater for a “picturesque” photo like I wanted. I didn’t even have time to set up my scope in the driveway. So this is a binocular observation.

Dawn twilight was well underway when I spotted Jupiter and Mercury naked eye. They were lined up vertically near the horizon, which is surprisingly low to the east and southeast from my home. I couldn’t see Mars until I pulled up the binoculars. Then, all three planets and Beta Scorpii were very obvious. Mars was located southwest of Jupiter, and Mercury rested northwest of Jupiter, about one-fifth the distance measured by the Jupiter-Mars alignment. All three planets formed a right triangle with Jupiter at the right-angle corner. Nearly in line with the Jupiter-Mercury alignment was Beta Scorpii.

With some effort, and bracing the binoculars against the corner of the carport, I was able to pick up a couple of the Jovian Moons simmering on either side of the planet. They were likely Ganymede to the east and Europa to the west. I probably would have had to mount the binoculars on a tripod to pick out Io and Callisto, which were closer to Jupiter in the morning twilight. Jupiter appeared as a thick, pale ivory disc, while Mercury was more stellar, and a bit more saturated yellow. Mars was the strongest color, exhibiting a pale brick-red color.

The sketch above was initially created outside as a pencil sketch. I then came inside and recreated the sketch in Photoshop, referring to my notes to add color. Photoshop was very useful in generating the backdrop of the vibrant blue dawn that filled the binocular view.

2 Replies to “Conjunction of Mercury, Mars, Jupiter, and Beta Scorpii”