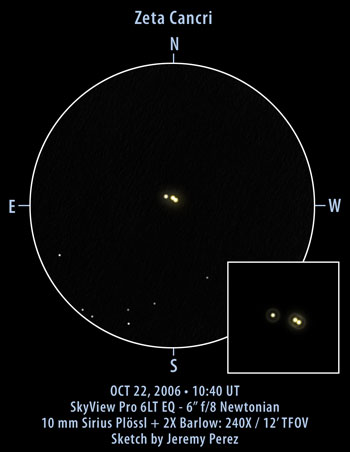 This was a great triple star. The central diffraction discs of the A and B components appeared to just touch at a position angle of about 68 degrees, which works out to a separation of about .9 arc seconds. These 2 stars were pale yellow in color and seemed so close in magnitude that I couldn’t tell which was the primary (which meant a PA of either 68 or 248 degrees until I researched the correct designation of primary). The third star appeared fainter, paler yellow, and at a position angle of 75 degrees. It was separated from the B star by about 4 diffraction ring radii, which works out to a separation from the A star of about 6 arc seconds. Actual values can be seen in the table below.