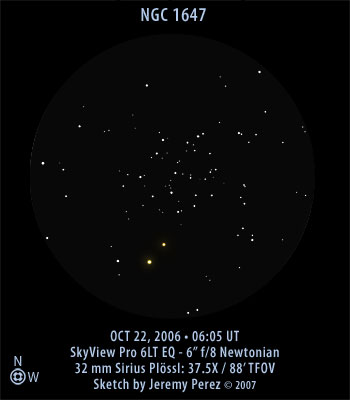 I first noticed NGC 1647 between the horns of Taurus in a wide-field astro photo I shot of the area in November 2005. I’ve been meaning to observe and sketch it since then. At 37.5X magnification, the cluster appeared large, bright and sparse. Two colorful yellow and yellow-orange stars rested at the south side of the cluster. I noted several doubles within. The diameter of the main body of the cluster appeared to be about 30 arc minutes.

Several bright Orionids graced the sky and caught my attention during the observation and sketch. Dave Saunders and I noted one meteor trail that lasted over 30 seconds. Nice!