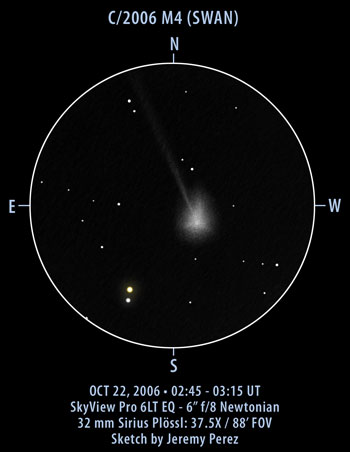 Move mouse over upper image for labels.
Click here for a large (51K) version of this sketch.

This was a surprisingly beautiful comet! The coma was bright and strongly condensed. I did not detect a pseudo-nucleus however. The slender gauze of an ion tail flowed toward the north-northeast at a position angle of about 20°. It was visible to a distance of about 1.5° from the coma and responded well to slow motions of the telescope. The coma itself revealed a subtle elongation with its core placed toward the southern side with the elongated coma flowing toward the north at a position angle of about 350°. As I spent time looking for any additional structure in the coma, I picked up what may have been a couple spokes at PAs of 90° and 230°. These were very subtle though, and may have been illusions. Over the course of a half hour, the comet moved about 3.5 arc minutes to the east.

Part of the visual appeal of this view was the bright double star Mu Bootis. The primary of this pair was bright yellow with what appeared to be a white secondary. With this bright double so close, I wasn’t able to make a successful effort to spotting it with the naked eye. It did show up easily through a 25 mm monocular. Through this monocular and my 10 x 50 binoculars, the magnitude of the comet appeared to be midway between that of Mu Bootis and the nearby pair HIP 75390/TYC 3052-1626-1. I’m not sure what the combined magnitude of each pair is, so I can’t give an estimate–although similarly timed observations hovered around 6th magnitude.

According to Gary Kronk’s Cometography, 2006/M4 (SWAN) was spotted on SWAN images by R.D. Matson and M. Mattiazzo “shortly before early July of 2006”. Perihelion was September 28.92, 2006, and the comet is moving in a hyperbolic orbit, which means it will be ejected from the solar system, never to return.