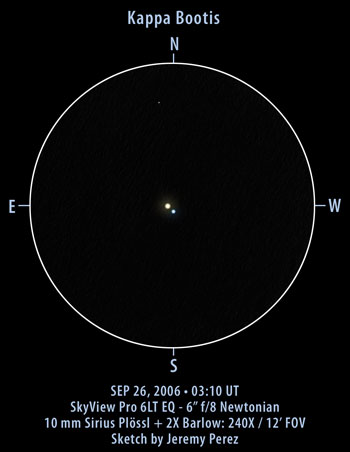 The primary appeared pale yellow with a dull blue secondary. I became a bit frustrated when I was preparing the report for this observation because the primary of this pair is A7V with a F1V secondary. So if anything, I should have seen a light blue primary with a pale yellow primary or a version of that where one of the components was white. Instead I actually had the colors swapped. I decided to do some hunting to see what other observers saw. I found that quite a few that actually mentioned color noted the same swap that I did. Here are the links to those sites:

Search for “Kappa” at those links until you encounter Kappa BOO. These observers (as long as they are listing the primary first) are seeing a bluish secondary every time, and a white or yellow primary. This appears to be a pretty deceptively colored double. But not everyone was deceived:

One suggestion I came across in James Mullaney’s book is to stop down the aperture of the scope to 3 or 4 inches to see if that helps increase the strength of the star colors. I’ll be paying a visit to the fabric store to grab one of those embroidery circles to set up an aperture mask and give this a shot.