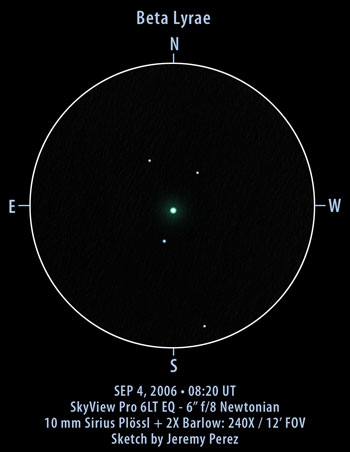 Although I was originally looking for a double here, there are two additional stars to the north of the primary that are included as part of Burnham 293. The primary, for some reason, appeared brilliant green in color–emerald green in fact. The secondary to the south was blue. I didn’t pick up color in the other two stars.

I am becoming more and more concerned about seeing green in some of these primary stars. I’m pretty sure the traditional scenario for green stars is A) A very close pair, B) An orange or red primary, and C) A secondary that is blue. I seem to be picking up green in primaries of wide pairs, without a red or orange companion, and on at least one occasion the green appeared on a yellow star. I’m picking up these colors while observing doubles from the light polluted realm in front of my house. Perhaps this is affecting me worse than I thought. The green effect on this pair was still startlingly beautiful.