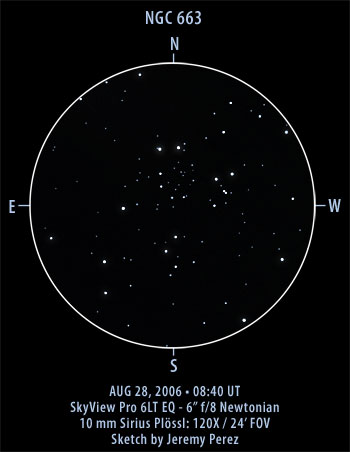 Riding the rush of just finishing a sketch of M17, I considered looking for the “Owl Cluster”. However, I couldn’t recall the designation, so I went after this beautiful cluster instead. The shape of the cluster seemed to be divided into 4 main clumps arranged north, south, east and west. The north clump was the largest and contained two bright stars at its northern end. The eastern-most of those 2 stars was a close, uneven double itself. About 108 stars are plotted in the sketch, with about 60 residing in the general vicinity of the cluster.