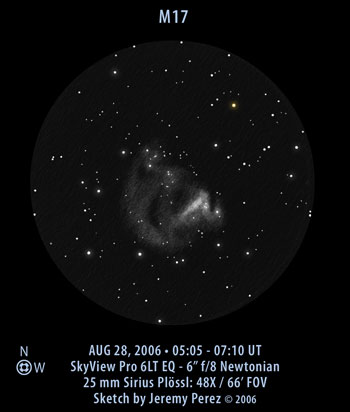 From Anderson Mesa, this nebula appears much larger than the typical swan shape that I see from home–even without the UltraBlock filter. The back of the swan is the brightest portion with the neck second brightest. The head appears to have a crest, and fainter wings appear above the body. The tail flows out to the southeast and then in multiple flowing arcs to the northeast and back around to the northwest.

I chose the 25 mm PlÃ¶ssl eyepiece to capture the full extent of nebulosity. The 10 mm PlÃ¶ssl framed the swan area nicely, but didn’t allow a full view of the extended nebulosity. I tried the 32 mm PlÃ¶ssl with a 2X barlow, and this would have been a perfect scale for the nebula, but this eyepiece combination caused too much glow around star groups to give a good look at faint nebulosity. There was a bright yellow-orange star to the northwest of the nebula as noted in the sketch. This sketch took 2 hours to complete, but the sky was clear and the experience was enjoyable. My only concern was that it would sink too far into the murk in the southwest before I finished. 172 stars are plotted in the sketch. 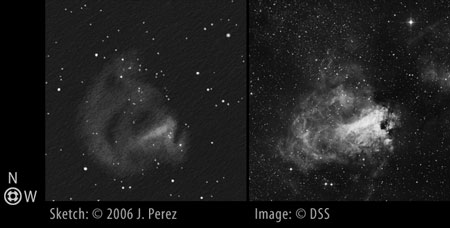 M17 is a region of star formation that shines by excited emission of light from radiant young stars within. The stars that heat and illuminate this nebula aren’t readily visible to the eye, or photographically, but are hidden within. It is estimated that a small cluster of about 35 of these stars are imbedded in the nebulosity.

Photographically, the color of the Swan Nebula is reddish. This color comes from the hot hydrogen gas excited to shine by the hottest stars which have just formed within the nebula. However, the brightest region is actually a white color. This white color isn’t just a photographic overexposure as I had thought, but is apparently a result of a mixture of red emission light, together with reflections of the bright star light from the dust in that region. The nebula also contains a large amount of dark obscuring dust, which is responsible for giving it its distinctive shape. However, even this dark dust is glowing brightly in the infrared spectrum, heated by hidden young stars.

The bright portion of the nebula extends roughly 15 light years, but the total cloud seems to extend at least 40 light years. The amount of matter in the cloud is estimated at about 800 times that of the Sun, which makes it more massive than the fantastic Orion Nebula (M42). It’s estimated that M17 is 5,000 to 6,000 light years away. It was discovered by Philippe Loys de ChÃ©seaux in 1745-46, but wasn’t widely known, and so rediscovered by Charles Messier in 1764. Under very favorable conditions, M17 is just visible to the naked eye. 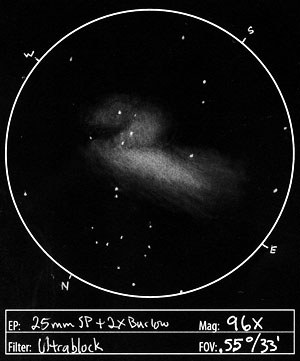 I remember the first time I looked at this nebula, the first thing I saw was a straight swoosh, which was cool in itself. But I was encouraged to look closer for some more features, and sure enough, the hook on the west side emerged into view. Once you see that feature, the “Swan Nebula” name makes perfect sense. It’s also called the “Omega Nebula”, but at best, it only looks like 2/3 of an Omega to me. So, the Swan it is as far as I’m concerned. It appears to be swimming to the west with its base on the north side (fortunately, my newtonian reflector rotates the image 180 degrees so I can get the full effect). The overall width of the nebula that I could see, appeared to be 14′ with the brighter portion being 9′ across. The brightest is along the upper back of the swan. There is a gap in brightness between the western body, and the curve of the neck. The neck brightens a bit as you head south, then dims at the top, before brightening again at the head. The east end of the body fans delicately to nothing. The north (bottom) of the swan body has the sharpest drop in brightness, as though sitting in water, while the south (top) of the body is a bit more diffuse. The Orion Ultrablock filter really helps bring out the details in the nebula. But I did need to remove it to get a better look at the dimmer stars. There is one star right in the position where the eye would be. This is a beautiful and delicate nebula that is a treat to look at. It’s a bummer that light polution made it difficult to see the dimmer portions.