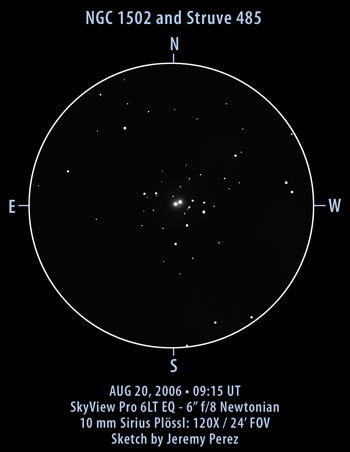 This little knot of stars was a stop I made while cruising through Perseus, Cassiopeia and Camelopardalis. As I navigated to the area, I ran into Kemble’s Cascade. It was a pleasant surprise–I’m not very familiar with the area yet. At low magnification, the double star at the center stood out immediately. At 120X, this brilliant white double still dominates the view, providing a spectacular heart to the cluster. The magnitudes of these two stars were equal as far as I could tell. The cluster itself is triangular in shape, looking a bit like a miniature head of Taurus with its snout pointing to the west. A couple other very tight, dissimilar doubles showed off near the center of the cluster (you will need to click the sketch above for a larger version in order to make out those tighter doubles). I plotted 33 stars within the general perimeter of the cluster–35 if you count a couple stragglers. The diameter appeared to be about 9 arc minutes.

NGC 1502 was discovered by Friedrich W. Herschel in 1787. Located near the southeast end of Kemble’s Cascade, NGC 1502 is sometimes referred to as the pool into which the cascade tumbles.

The brilliant double at the heart of the cluster is Struve 485. According to the Washington Double Star Catalog listing in Vizier, the magnitudes of the pair are listed as 6.93/6.94, with a separation of 17.9″ and a PA of 304Â°. The Saguaro Astronomy Club Catalog and a number of other sites list magnitudes of 7.0 and 7.1 however.