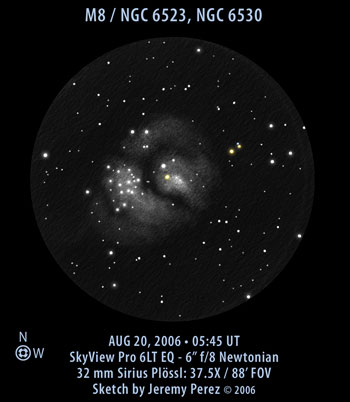 M8 has been on my list of “ambitious” sketches to do or re-do for a few months now. I observed and sketched it nearly 2 years ago, and have been waiting for the right opportunity this summer. I tried observing and sketching it one evening earlier in the week, but got skunked by clouds before I could finish the star field. I came back a couple nights later, and the outflow of clouds from a thunderstorm to the east threatened to bring things to a halt again. So I did some impromptu observations until things seemed to clear back up a bit.

This is such a rich and well-lit nebula/cluster, that it’s hard not to just relax and feast on its visual delights. But I had decided I was going to turn this one into a project. I wanted to capture the cluster and field stars as accurately and deeply as possible. This in itself can be a pretty tedious process, but the regular blackouts caused by interloping clouds made it very aggravating. Especially since I was doing the observation pretty late in the season, and Sagittarius was threatening to set on me. Observing shouldn’t be aggravating. Tedious from time to time, sure. But aggravating, not so much. I was being stubborn though. And I kept plugging along until an hour and 40 minutes later I was satisfied I had captured all I could, and the clouds went ahead and made a permanent home over the southwestern sky.

Something I find very interesting about the embedded cluster NGC 6530 is the grid-like geometry of its stars. It seems to bear an amplified kinship to the squared angles of M29–a junior sized favorite of mine. The UltraBlock (~UHC) filter does a great job of defining the boundaries and clots of brightness in the nebula, but I find the unfiltered view to be the most pleasing. Without the filter, the view is thickly seasoned with Milky Way field stars and the members of the open cluster just seem to nestle and burn themselves in their folded blanket of nebulosity. I noted some star color in a few places, and these are depicted in the sketch.

There are two main objects that compose this object. NGC 6530 which is the open cluster of stars, discovered in 1680 by Flamsteed. The nebula that these stars are imbedded in, NGC 6523, was discovered by Le Gentil in 1747. When Charles Messier catalogued it in 1764, he primarily described the cluster, and mentioned the nebula separately as surrounding the star, 9-Sagittarii. However, the nebula is now generally regarded as M8.

The distance to M8 is believed to be from 4850 to 6500 light years. If the distance given by David Eichler of 5200 light years is correct, then the nebula measures 140 x 60 light years across. The brightest portion of the nebula contains a region known as the Hourglass Nebula, which is region currently undergoing new star formation. There are also a number of dark nebulae known as globules in the Lagoon. These are collapsing protostellar clouds with diameters of about 10,000 AU.

This is a beautiful emission nebula. It took up about a half degree of irregular area in the field of view. It was divided into 3 main sections. The SW lobe was the most compact and brightest. It contained 2 bright stars lined up north to south. The SE lobe was second brightest and contained several stars. 11 of them stood out as the brightest–like a freckled cheek. In the dark lane between these two sections, a really dim double star winked in and out of view. (I drew them too dark in the 37X view.) The north lobe was the dimmest of the three, and sprawled the most. There were three bright stars involved in this area. I used the Orion Ultrablock with the 25 mm eyepiece to bring out the details in the nebula. Adding a 2X barlow for 96X magnification confirmed the double star in the dark lane. Many more involved stars started to show up at this magnification. But it was getting too low in the light pollution bubble to make out better with the nebulosity.

This was my first attempt at sketching a nebula. I didn’t do any real blending, so the pencil lines are pretty rough. I didn’t show any nebulosity in the 96X view, because there was too much light pollution to make it out.