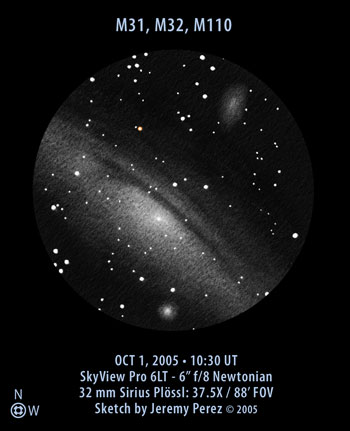 I’ve been wanting to redo the sketch on this observation for some time now. In the original sketch, I plotted a couple key stars near the second dust band too far away from their neighbors. Since I was using those stars to bracket the position I discerned for that second band, I ended up shading it too far from the core. See the original sketch below with the rollover to see what I mean. This sketch is not from a new observation, it’s a correction to the original below. After replotting those stars more accurately, I re-rendered the galaxy, with the result you see above. This really stresses the importance of getting the framework stars plotted accurately if you want any extended objects to tack in where they belong.

Sketch/DSS Photo Comparison of Messier 31, 32, 110 (The Andromeda Galaxy and Companions) 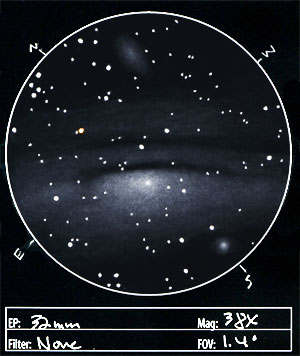 Move mouse over image to see photographic overlay of M31 and dust lanes.
Overlay photo courtesy of: Bill Schoening, Vanessa Harvey/REU program/NOAO/AURA/NSF
(See the comments section at the bottom of this page for discussion on the wide position of the 2nd dust band in the sketch.)

I’ve really been wanting to spend some time on this one. These 3 galaxies make for a majestic view. I’ve been observing M31 off and on for a while now, trying to get a better sense of what it displays in my scope. M31 displayed a nearly stellar core, with brightness that fell off gently to the southeast. The northwest side dropped in sharpness quickly, giving a starting point to finding the inner dust lane. The second dust lane is much harder and there is just a tinge of brightening on the other side of it. M110 really enlarged in apparent size with averted vision. M32 sat very close to the fade-off on the southeast side of M31. An orange star rested 18′ north of the core of M31. There were lots of triangle asterisms peppering the field.

Also, what gives with the humongous mosquitos?? Isn’t it too cold for them now?

(Click these links to find previous observations of M32 and M110.)

Factoids:
Visible to the naked eye under even moderate skies, M31, The Andromeda Galaxy, was first described as the “little cloud” by the Persian astronomer Abd-al-Rahman in 964 AD. It is our nearest, large neighbor galaxy. It comes as a set with two smaller, but prominent elliptical satellite galaxies, M32 and M110. It lies about 2.9 million light years away and is approaching our galaxy at 100 km/sec. Not only does The Andromeda Galaxy occupy a large swath of sky (more than 6 times the width of the full moon), but it is literally a huge galaxy at 250,000 light years wide. That makes it more than twice the diameter of the Milky Way. Yet it appears to have less mass than our galaxy–implying that the Milky Way is much denser.

Observation Notes:
After my 10/3/04 observation, I gave M31 another try. This time, I was able to make out a dust lane on the western side. Nothing distinct. But the cutoff at the core is more obvious to me now, and I’m also picking up a brightening on the other side of the dark lane now. Wahoo! 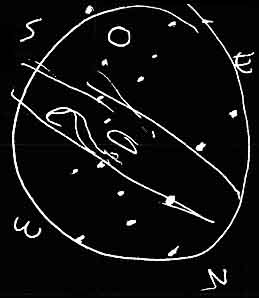 Observation Notes:
The Andromeda Galaxy was the 2nd sight I pulled up when I first got my 6″ reflector (right after The Pleiades). It is a bright and unmistakable sight. As long as the moon isn’t washing out the sky, it is an easy naked-eye sight for me–a soft smudge that only hints at its truly huge size. Each time I view it, I seem to pull more detail out. As I viewed it on this occasion, the first thing to jump out is the brilliant, starlike core of the galaxy that quickly drops off in brightness moving away from the center, and then gradually fading off into the background of sky. It is strongly elongated from SSW to NNE. Taking some time, I could tell that the W side has a sharper drop in brightness than the E side. There was also the appearance of an interruption in brightness intruding on the S elongated side. The soft, round glow of M32 was the most obvious companion to the SE.