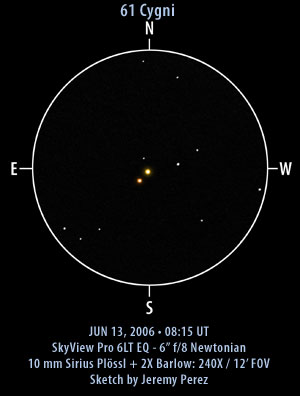 This is one of seven double star sketches I submitted to Sky and Telescope for an article in the September 2006 issue, More of My Favorite Double Stars by James Mullaney. I had already observed five of them, but 61 Cygni was a fresh observation. It was a warm, uneven double, showing a yellow-orange primary with a deeper orange secondary sitting at approximately 140Â° PA and about 36 arc seconds away. WDS measurements from 1993 list 149Â° PA and 30.4 arc second separation.

61 Cygni is noted for being the first star to have its distance gauged by measuring its parallax. This was measured in 1838 by Friedrich Wilhelm Bessel, who according to Burnham came up with a value of 10.3 light years. The current value is given as 11.4 light years. Due to its proximity the double also has a very rapid proper motion of 5 arc seconds per year. The orbital period of the pair is 650 years.