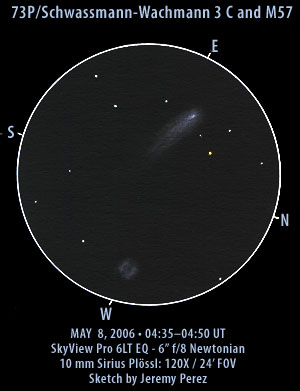 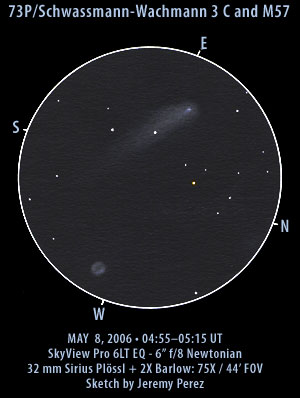 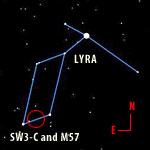 This evening, 73P/Schwassmann-Wachmann 3 C was due to brush past M57 by just 3.5 arc minutes at 03:00 UT (8 PM MST). Unfortunately, Lyra was just beginning to crest the horizon at 8 pm. I finally got a good look at it about 9:30 PM. The comet and planetary nebula both shared the 120X (24′ wide) field of view. It was pretty amazing to see them together, but the comet was moving so fast that I couldn’t take time to just soak it in. I had to get moving on the sketches if I wanted to capture them together. Still, sketching the view was fascinating. Every time I looked up from the sketch sheet, the comet had moved noticeably. What a lively view!

The first quarter moon and local light pollution really took a bite out of the comet’s diffuse outer edges and the fainter stars that were surely there. So the view wasn’t as aesthetically pleasing as it could have been. The faintest star I picked up at 120X was mag. 11.3. The comet’s tail appeared about 7′ long with a coma diameter of about 1.5 arc minutes. That was significantly smaller than the 70’/6′ that I saw a week ago with no moon.

The 75X view came in handy as the comet continued to sail away at 12 arc seconds per minute. In this view, the comet was a bit higher in the sky and the tail appeared more like 11 arc minutes in length with a coma 2 arc minutes in diameter. In both views, a yellow-orange star (TYC2643-823-1) burned to the northwest of the comet.

After making the sketches, I worked on some astrophotography. Through-scope photography isn’t one of my strong points, but I went for it anyway. This shot represents a stack of about 12 30-second exposures, using barlow projection with my Canon Digital Rebel at ISO 1600. I can’t manage enough in-focus to do prime focus photography on my scope, so the shots aren’t wide enough to include M57, but oh well. 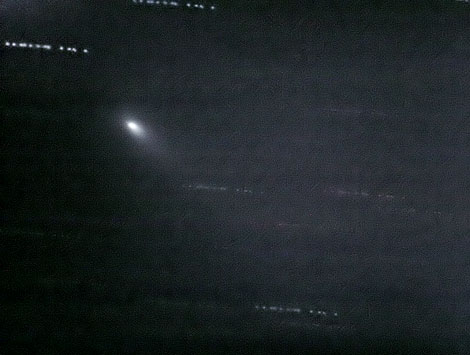 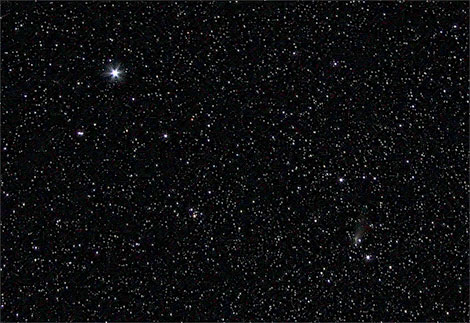