Saturday night, May 6th, was Astronomy Day. This synched up nicely with the CAS meeting at Lowell Observatory. I was scheduled to give a 10 minute presentation on Astro Imaging. I got a little ambitious with the presentation, and coupled with being last-guy-on-the-program, I had to really burn through it, auctioneer style. Afterward, I was revved up like Beavis on a Twinkie binge.
I also had the pleasure of meeting Eric Graff and Geoff Gaherty who were both coincidentally visiting Flagstaff on the same day. Eric is an unbelievably talented visual observer and sketcher whose work I’ve admired since I got started. (Check out his gallery of astro sketches, if you haven’t already.) Geoff is a Canadian observer who specializes in observing and recording variable star data with the AAVSO. He gave a motivating presentation on how to get started in variable star observing and how to submit observations. 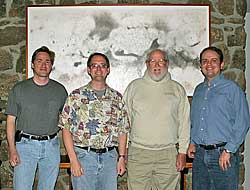 Left to Right: Eric Graff, Bill Ferris, Geoff Gaherty, Yours Truly
After the CAS meeting, we set up telescopes in front of the rotunda for public viewing. Because it was Astronomy Day, and Lowell was raffling off some nice prizes, the place was packed. There were 7 or 8 of us with telescopes/large binoculars, including Eric who was a real champ and brought his 6″ Parks Astrolight cross-country. I decided to be a cheater and pulled up Saturn in my scope. You just can’t go wrong with Saturn–it’s an undeniable crowd pleaser. Listening to people exclaim over it and call their friends over is an infectious sort of excitement…particularly when they say the view through my scope looked even better than the 10″ scope that was trained on it up the hill 😀 (the atmosphere was pretty cantankerous and churned-up that evening, so my smaller aperture was a bonus).
Some photos are below. Click on any for a larger version. (In case you’re wondering, these are long exposures, so that’s why the people are blurry.) 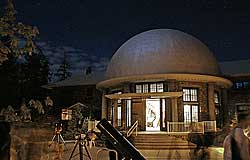 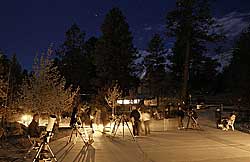 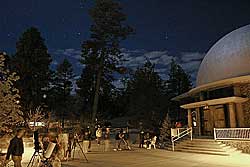 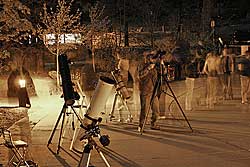 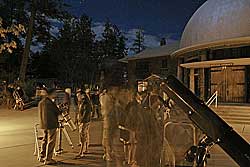 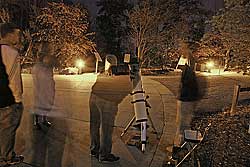