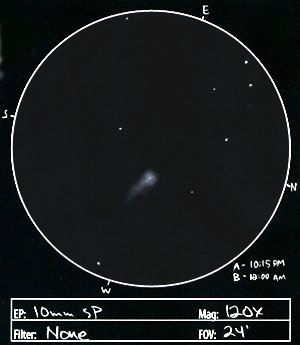 This was my first of what I hope will be many observations of this comet. I found it just east of Arcturus, and even from the less-than-ideal glare in front of my house, it was readily visible. It immediately portrayed a streak-like appearance, which was encouraging. Two stars in the northeast edge of the view (GSC 1483:21 and 1483:24) provided some scale. Those stars are 107″ apart, and the comet’s coma had a diameter that was a bit more than half that distance–so about 1′ in diameter. And the tail seemed to be a bit longer than that distance–about 2′ long from pseudo-nucleus to faded out edge.

The pseudo nucleus was fairly condensed, but seeing was very poor, and I couldn’t say if it took on a stellar appearance. Over the course of 1 hour 45 minutes, the comet appeared to move about 2′ to the northeast. Checking TheSky planetarium software later revealed the motion to be 2’10” over that time period 😀

73P/Schwassmann-Wachmann 3 was discovered May 2, 1930 by Arnold Schwassmann and Arno Arthur Wachmann on minor planet survey photographs. During that apparition, the comet passed .0616 AU from Earth and reached between magnitude 6 and 7. During the 1995 apparition, the comet underwent 3 outbursts. Subsequently, it was observed to have broken into 5 nuclei. As of April 4th, 2006, 19 components have been observed. It will pass .08 AU from Earth on May 12, 2006, possible reaching mag. 3.5.