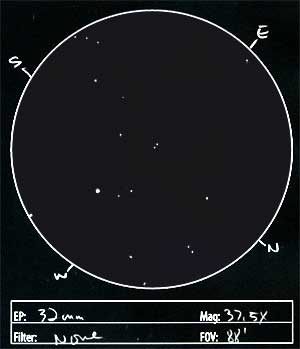 I wasn’t planning on doing a full-blown observation and sketch of M40 when I did. Which is to say: at the All Arizona Messier Marathon. I hadn’t done any research on it before heading 250 miles south to Arizona City. When the time came to find it, I realized all too late that my star atlas didn’t have it marked, and the rough finder chart I was using just plopped me in the general vicinity. Well, there are several double-star candidates in the area, folks. I didn’t know which was which. I kept panning around the area thinking ‘Oy, one of these doubles has got to jump out at me right?” mmmm..no. After listening to me gripe about it for going on a half hour, my observing neighbor, John Moschinger, slewed over to it. I had a look through his scope and Telrad finder, but I just wasn’t 100% certain.

So I horsed around with it for another twenty minutes, when out of the darkness, a figure appeared, silhouetted by the Tucson light dome. The figure sounded an awful lot like Don Machholz. I announced to the figure that sounded like Don Machholz that M40 was about to whup me. The figure offered to take a look, so I re-centered the view and he confirmed that yup, I had M40 in the view. He described which double star was the real deal. So I took a look, and precisely centered on what he had described. He took another look and said I had it. BAM! So you know what he says next, right? “Oh by the way, I’m Don Machholz.” …to which I said, “Yeah, I kinda figured, Don. It’s me, Jeremy Perez from Flagstaff…(the geek who took a picture of you and Brent earlier)…Uhm…Thanks man, you made my night! Thankyou thankyou thankyou!“.

So anyway, I couldn’t move on without sketching that crafty pair of stars. (See the double dead-center in the sketch.)

This double star was catalogued by Charles Messier in 1764. He found it while searching for a nebula that was wrongly reported in the area by Johann Hevelius. The two stars are currently separated by 49″. The latest data on the pair, according to Richard L. Nugent concludes that they are an optical pair of stars, rather than gravitationally bound.