A couple weeks ago, while at the SAC meeting at Lowell Observatory, Padraig Houlahan noted that an Iridium Satellite was going to flare up to -8 magnitude shortly after the meeting. I had never seen one of these reflective rascals before, so I made sure to set up the camera to catch it along with Padraig. Right on time, a decently bright satellite began to sail down out of the north-northeast, headed almost straight for Sirius. Just as it got level with the belt of Orion, it quickly grew in brightness until it was like a distant motorcycle headlight glaring at us. It faded back out just as quickly and passed faintly just to the east of Sirius. The wide and magnified photographs are below. 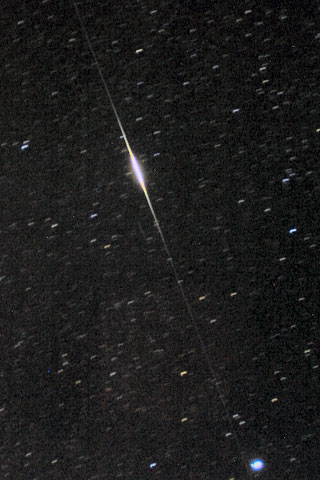