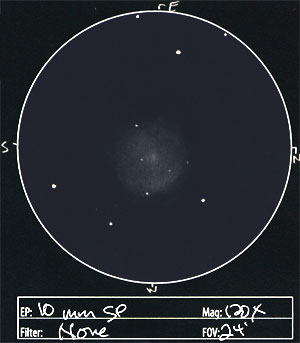 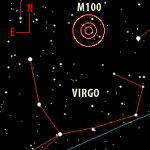 My search for Supernova 2006X, was a good opportunity to observe M100 as well. The galaxy was circular with a bold, condensed core. There was a hint of mottling in its outer stretches. The brightest portion appeared to extend northwest to southeast, with a brighter patch arcing around the northwest side.

Trying to spot SN2006X was difficult, as I figured it would be (if I could see it at all). The stars marked A and B in the rollover graphic were faint (listed as mag. 14.2 by the AAVSO), but constantly seen. An extremely faint stellar object flickered occasionally at a point midway between A and B. During a 3-4 second of preciously agreeable seeing, that stellar point flickered more obviously, and gave me more confidence in the sighting.

One of the brightest Virgo Cluster galaxies, M100 is a spiral that faces us nearly face on. It has 2 main bright spiral arms and several fainter arms. Star formation has been sparked in spiral arms due to interactions with neighboring galaxies. It lies about 56 million light years away. M100 was discovered in 1781 by Pierre Méchain and subsequently catalogued by Charles Messier.