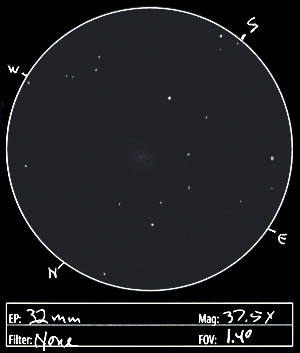 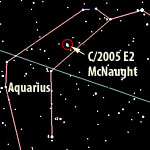 I thought it would be nice to catch this comet from a dark site to help make up for its proximity to the horizon at evening twilight. I didn’t count on the zodiacal light. It was massive and bright, and the comet was right in the meat of it. I was surprised to see it at all. Star hopping was tough–lambda aquarii (mag 3.7) was visible naked eye, but Kappa Aquarii (mag 5) was not. Once I got to the correct area, the comet showed up as a very subtle brightening in an already bright field. The core appeared as almost stellar with averted vision. I had to sketch the field and comet quickly to catch it before it sunk behind the hills to the west. As a result, I wasn’t able to capture a second position to note motion. Bill Ferris took a look and confirmed the observation. The visible width of the coma appeared to be about 3-4 minutes in diameter. The background of the sketch has been lightened to represent the bright sky background.