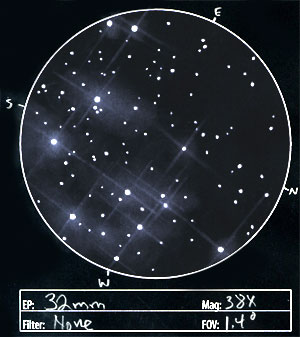 Observation Notes:
I began this observation while waiting for the waxing crescent moon to set and allow for some fainter observations and photography. Conversations with Bill Ferris, David Saunders and Marc Wiley who were also out observing, made for a very leisurely sketch process. Besides the glare from the brilliant blue stars, I though I was also picking up some oblong nebulosity that didn’t completely correspond to the glare. Bill and David took a look and the haze around Merope was possibly real, but it was hard to say about the rest. My optics probably aren’t up to this challenge due to their tendency to reflect glare on bright stars rather easily. I decided to shade in everything I saw, glare or nebulosity alike to see what I could see. I’ve included an overlay photo (move your mouse over the image), courtesy of the Anglo-Australian Observatory for comparison.

Factoids:
Known since the earliest times, the Pleiades star cluster readily shows 6 stars. This number increases to 9 under moderate conditions, and more than a dozen under clear dark skies. The number of stars in the cluster is now known to be at least 500. They were catalogued by Charles Messier in 1769.

Long exposure photographs reveal that the Pleiades are imbedded in a nebula. The bluish color of this nebula indicates that it is a reflection nebula. The brightest nebula around Merope was discovered by Ernst Wilhelm in 1859. The portion around Maya was discovered in 1875, and the nebula around Alcyone, Electra, Calaeno and Taygeta was discovered in 1880. The nebula is probably dust in a cloud unrelated to the cluster. It would not be the remainder of the cloud in which the Pleiades formed, since the cloud is crossing paths with the cluster at a speed of 11 km/sec.

The age of the Pleiades is currently estimated at 100 million years, and they are expected to survive another 250 million years, at which time they will have spread out as individual stars. Direct parallax measurements put the distance of the cluster at 380 light years.

The Pleiades cluster contains a few white dwarf stars, which leads to some challenges to stellar evolution. Since it should take billions of years for a white dwarf to form, they seem inexplicably out of place in this young star cluster. How could stars that should be billions of years old be part of a 100 million year old cluster? Because there are more than one white dwarf, they must be original cluster members, and not incidentally captured dwarfs. It is believed that these white dwarves were once massive blue giants that lost their outer shells due to fierce stellar winds, close encounters with other cluster members, or due to extremely fast rotations (which a number of stars in the cluster have demonstrated). If enough of the outer shell of gas was lost, the mass of the star could be lowered enough to allow it to become a stable white dwarf, instead of the usual young fate of a blue giant, which is a neutron star, or a black hole. I think this is incredibly cool.

Because the Pleiades are within 4 degrees of the ecliptic, the moon frequently occults stars in the cluster, creating an enjoyable spectacle in telescopes, binoculars or the naked eye.

Observation Notes:
The Pleiades is so bright, it seems unreal. The main portion filled the 1.4 degree field of my 32 mm eyepiece. I know there was supossed to be nebulosity there, but the key stars were too bright to pick it up in their glare. There was an asterism of 11 stars running off the SE end of the cluster in the shape of a reclined lawn chair. My 37X sketch isn’t too great at capturing the difference in brightness between the wide range of stars. Next time, I’ll try and do better with that, because it really is an obvious difference in the eyepiece.

I decided to try resolving the apparent double star in the middle of the cluster. Using a 10 mm eyepiece with a 2X barlow, I was eventually able to detect a faint star peeking through the turbulence NNW of the western-most star in the double. The 2 main stars are listed as SAO76167 and SAO76169. The latter is the one with the dim companion. Some research showed this listed as Burnham 536, a triple star with magnitudes listed as 8.1, 9.4, and 7.7. It seemed strange that the 9.4 mag star was so hard to detect.

Some additional research by the helpful folks at CloudyNights.com showed that Burnham 536 is actually a 4 star system with the easternmost star being a super-close double star itself with a separation too tight to be resolved (.23″). The magnitudes of the 2 stars in that tight double are listed in Sky Tools as 8.34 and 9.96. The bright western star is listed as magnitude 8.1, and then the dim star I saw was listed as magnitude 12.1. That agrees much better with what I saw. It was also noted that my notations of SAO76169 and SAO76167 in the sketch are probably reversed. I double checked in the program I use (The Sky), and in fact I did reverse those numbers. So many stars. So many labels to mess up…