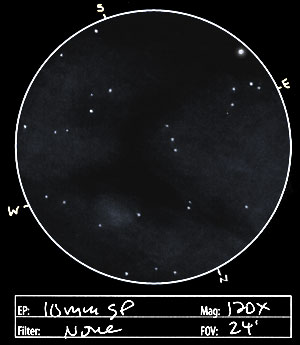 This was not a particularly spectacular observation, but it was a nice catch. Fueled by an article in the December 2005 Sky and Telescope magazine by Sue French, I decided to hunt this star cloud down. It had been a month since I made a concerted effort to sketch M31 and its two main dust lanes. At the start of this observation, I noticed those lanes showed up pretty easily. It’s interesting how festering over an observation really stacks the deck in your favor on subsequent delvings.

After centering my view on the correct region and inserting my 10 mm PlÃ¶ssl for a 120X magnification, I began to notice an uneven appearance to the galactic disc. NGC 206 didn’t jump out right away, but after some extended scanning and averted vision, a soft bright patch began to take shape. If you draw an imaginary line between a bright star along the east edge of the sketch, through the center of a north-south trio of stars in the center, you will run into the star cloud about the same distance away on the other side. After shading in the star cloud, I spent some time hinting in my perception of brightness variations in the galaxy itself. In particular I noticed a dark bay south of NGC 206, a brighter patch along the southwest side of the view, as well as some other broad swaths of uneven brightness. The rollover image shows I picked up some of the general aspects of the dust bands in the area, but it I wasn’t terribly precise. I can’t wait for the day I’m re-exploring these varmints with a 10″ or larger scope.

Factoids:
NGC 206 was noticed by William Herschel during an observation on October 17, 1786, and catalogued as H V.36. It is an immense collection of luminous stars in M31, the Andromeda Galaxy. Analyses of M31 indicate that this portion of the galaxy is unusually dense with interstellar gas that is fueling the robust star formation. The age of the stars in this cloud is estimated at around 20 million years. Radio wavelength images of this area show a 1,200 x 2,400 light year cavity in the interstellar matter showing how effectively the newly abundant stellar winds have cleared out the formative gases.